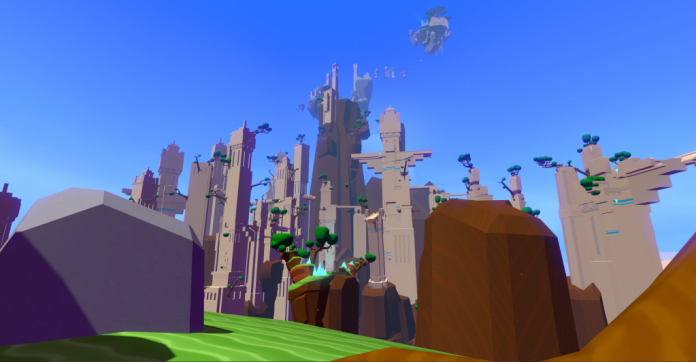 The most lo-fi title to be available for the Oculus Rift at launch, Windlands is an intentionally stylised piece of entertainment. Eschewing the traditions of presentation both visually and ceremonial, Windlands makes a bold statement about the indie development revolution that has helped drive virtual reality (VR) over the past two years.

Introductory tutorial, objective signposting, storyline, reward systems; all of these are disposed of from the very beginning. Windlands offers the player nothing but the thrill of playing. It’s beautiful in it’s simplicity, both aesthetically and mechanically, but it could also be seen as daunting to the uninitiated. More so when considering the movement system upon which the videogame is based.

Noted as ‘intense’ in Oculus VR’s Comfort Rating System, Windlands is most certainly never less than that. The basic premise of the videogame is to discover a route that will take you from point A to point B using three potential movement options: walking, jumping and swinging. Walking is controlled by the left analog stick on the Xbox One controller, jumping – or rather, leaping – is a press of the A button and your grappling hook can be latched onto the flowering parts of trees by placing the reticule in the centre of your vision over the green area and depressing the R trigger. It’s a very simple system to learn, but the nuances of controlling momentum take a good amount of investment to master.

Momentum is key here: Windlands breaks so many of the perceived rules of VR design that it’s almost impossible to keep up with them all. Acceleration is felt both on foot and in the air, and is handled remarkably well. The sense that you’ve hit top speed and are able to bound greater distances is almost tangible at times and there’s a genuine rush as you hit the bottom of a swing and begin to be propelled upwards once again. Furthermore, a missed jump isn’t simply cut immediately for a respawn: Windlands lets you fall. The sensation is similar to that of being on a rollercoaster as it reaches the peak of its biggest incline: looking down to see the floor below and feeling your body accelerate as you rush into the unknowing abyss.

‘Intense’, certainly. Windlands will undoubtedly be too much for many. Simulation sickness has always been a big concern for modern VR, and Windlands will not do anything to help with this perception despite the many ‘comfort’ options the videogame hides within its menu system. Regardless of the fact that the videogame adheres to the now standard rules of framerate and latency, Windlands‘ mechanics are at times seemingly devised with the sole intention of pushing the boundaries: many may feel it pushes them too far.

Despite seemingly needing to go against the grain in so many areas, Windlands does offer the player some recognisable supplements to encourage replayability. Timing the player’s progress through each section to give them a ‘score’ to beat on a second play and hidden collectables of various types are two of the checkboxes the team decided they would check.

Windlands is a genuine thrill ride when at its peak, but far too often it dances too close to danger. Short bursts of gameplay are most certainly the recommendation here, but even then many will suffer that dreaded simulation sickness too soon to discover the real depth of Windlands‘ unique gameplay. One for one the most committed VR enthusiast, and even then only those willing to persevere through the rough to champion the smooth.