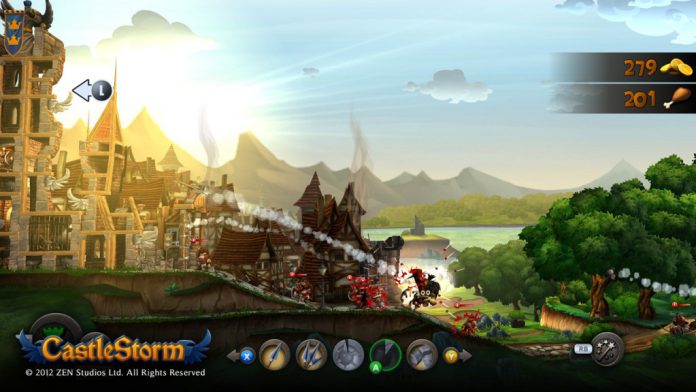 Zen Studios’ entrance into the world of virtual reality (VR) was unexpectedly early, and yet the developer made a bold statement for the future of their franchises with the widely respected debut Pinball FX VR. The studio’s second release, CastleStorm VR, has now arrived on both Samsung Gear VR and Oculus Rift and with it brings yet more interesting ideas as to how best adapt traditional videogame formulae to VR experience.

CastleStorm is an unassuming videogame that has seen its way onto numerous formats; console, mobile and PC have all benefited from a release at various times. It’s a 2D strategy videogame in which the player has to prevent the demolition of their own castle whilst aggressively pursuing the destruction of their enemy’s. Players will spawn troops, call upon heroes and manually fire a tower-mounted crossbow to secure victory. That alone is an enticing prospect for most strategy gamers, but how does this all fit in VR?

A significant amount of adaptation has been required to make CastleStorm a palatable experience in VR. Most of the adjustments made are subtle and won’t become apparent to even the most ardent CastleStorm player until several hours have been invested into CastleStorm VR, however there are two key changes that are prominent enough to make note of here: the delivery of the story and the perspective of the player in-game.

CastleStorm VR begins with the player in a virtual cinema with an art style that pleasingly reflects the in-game aesthetic. Knights guard the screen as the king sits in wait, with a young queen aside him that looks less than enthused. The story cut-scenes play out on the 2D plane of the screen ahead, as do all the options menus and game set-up screens. However, once in-game the perspective changes.

The original CastleStorm typically plotted its level construct with the player most concerned with the action central and towards the enemy castle, with options to quickly zoom-in on a specific area or out to encompass the whole map. However, CastleStorm VR begins with the player much closer to the action, able to see the minutiae in far greater detail. The player is simply able to turn their head to pan across the map when desired, though from the closer-to-home-base angle Zen Studios has opted for deep into the action. The arc highlight of the player’s crossbow is highlighted red also, allowing for greater distinction of projected target when the player is no longer looking at the point from which the ammunition is launched. 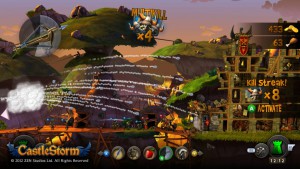 Elsewhere, CastleStorm VR most significantly reflects the current-generation console versions of CastleStorm. The control scheme is mapped to the Xbox One control pad on Oculus Rift (and similarly implemented in the Gear VR edition, which requires a bluetooth controller) and the visual quality is on par with the most recent console releases. The user interface (UI) has seen some significant changes to accommodate the user’s dynamically alterable viewpoint, but everything the player requires remains instantly accessible.

CastleStorm VR, much like Pinball FX VR, goes to great lengths to demonstrate how a videogame once thought not appropriate for VR can easily become an engrossing entertainment product. Its similarities to the non-VR version of the videogame, akin to Square Enix’s Hitman Go: VR Edition, may mean that some will be antagonised by the inflated price point; however those yet to sample Zen Studios’ 2D strategy experience now have no better place to do so than in VR.