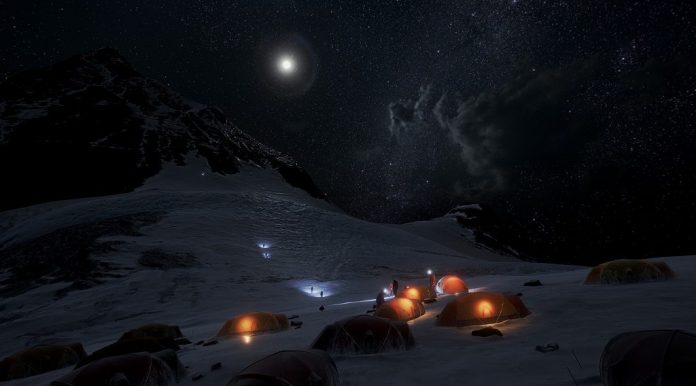 If you love to explore the great outdoors but you’re also an avid virtual reality (VR) fan then now you can mix the two together thanks to Sólfar Studios. The developer has now released EVEREST VR for the HTC Vive head-mounted display (HMD).

Created in partnership with RVX, a leading Nordic visual effects and animation house, Sólfar Studios’ EVEREST VR is an immersive and interactive recreation of summiting the highest mountain in the world, Mt. Everest.

Utilising stereophotogrammetry techniques and multi-resolution shading, the two companies created the first-person experience by piecing together thousands of high resolution images of the mountain range to create a definitive CGI model of the mountain. They then generated a 3D mesh and textures made to measure for the demands of a real-time VR application, to give the user a true sense of presence on the mountain.

EVEREST VR guides adventurers through several sequences while ascending Mt. Everest, including notable milestones and interactive events from Base Camp, the Khumbu Icefall, Hillary Step, Camp Four, and the ascent to Summit. The title also features a God Mode that allows users to take in the sweeping views of the Himalayas.

“For the first time, people will be able to experience the thrills and milestones of climbing Mt. Everest from the convenience and safety of virtual reality devices,” said Kjartan Pierre Emilsson, co-founder and CEO of Sólfar Studios. “While many have called 2016, ‘The Year of VR,’ a majority of the public is still unfamiliar with the space. We see the release of EVEREST VR as a way to showcase the power of the medium, by delivering a transcendent experience that goes far beyond the goal of winning a game – allowing users to experience the physical and emotional sensation of conquering one of world’s greatest wonders.”

The title can be downloaded via Steam for an introductory price of £17.09 GBP until 9th August, after which it’ll return to its regular price of £18.99.

For all the latest VR releases on Steam, keep reading VRFocus.