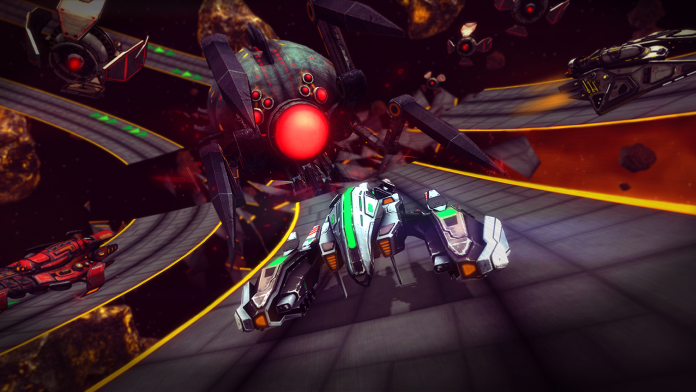 Back in May 2015 UK-based Tammeka Games released a spin-off of its long awaited virtual reality (VR) racing title, Radial-G, in Radial-G: Infinity on the Android operating system (OS). The title was compatible with the Google Cardboard mobile-based head-mounted display (HMD). Today, the developer is announcing Radial-G: Infinity X, an upgraded port of the title that’s on its way to anther mobile-based HMD, the Gear VR from Samsung and Oculus VR.

Radial-G: Infinity X maintains the core mechanics of the originally, tasking players with outrunning a robotic squid boss that chases them. Players must fill a mega boost meter by collecting orbs and gain other power-ups such as bombs and shields to help get ahead of their enemy. Radial-G’s green speed boost pads and red slowdown areas also feature. While the original version of the title didn’t support any Bluetooth gamepads, this new version does.

Tammeka Games is also passionate about supporting all version of Gear VR and not just the recently-released consumer version. That means that, along with the Galaxy S6, Galaxy S6 edge, Galaxy S6 edge plus and Galaxy Note 5, Radial-G: Infinity X will also be heading to the Galaxy Note 4 and the original Innovator Edition of the Gear VR. Producer Sam Watts told VRFocus: “We’re working on improving performance on Note 4 to release across all GearVR editions as we strongly believe that at this primordial stage of VR, early adopters shouldn’t be punished for helping build the initial interest & community.”

It’s not yet clear when the title will launch. The full Radial-G experience, however, is currently available via Steam Early Access and is awaiting a true release on the Oculus Rift HMD among others.

VRFocus will continue to follow Radial-G: Infinity X closely, reporting back with the latest updates on its progress.