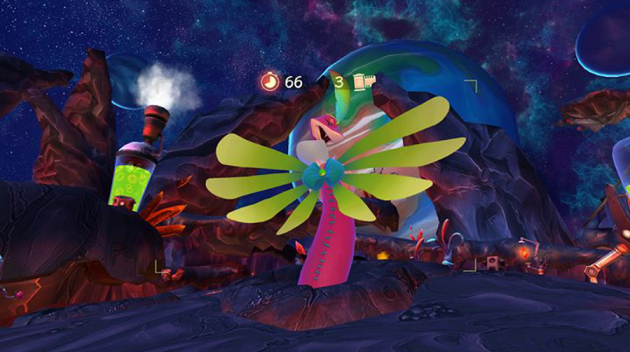 Brazilian videogame developer Black River Studios’ title Jake & Tess’ Finding Monsters Adventure which originally launched for Android mobile devices, has now made its way to Samsung’s Gear VR head-mounted display (HMD). The virtual reality (VR) version of the title was originally revealed at Oculus VR’s developer conference back in September, and now with the mobile headsets consumer release, VR fans who have managed to grab one of the HMD’s can enjoy this visual treat.

Jake & Tess’ Finding Monsters Adventure centres around the titles protagonists Jake and Tess who find a magical gateway in their bedroom to an amazing world. The duo are given a magical camera by their mysterious guide Spindle, and tasked to find and photograph all the monsters they can. The title follows a story created by Martin Olson, known for his work as a writer in Phineas & Ferb. Spaced across three large vividly designed worlds, you must discover and document the monsters you find on your journey. Doing so will unlock new collectable like masks to add to your collection, and aide in you in your quest.

The videogame doesn’t require a separate gamepad, and currently for a limited time to celebrate the launch of the Gear VR, Black River Studios has discounted Jake & Tess’ Finding Monsters Adventure from its normal price of $7.99 USD to being completely free.

VRFocus will continue to follow the latest VR projects from Black River Studios closely, reporting back with any further announcements.