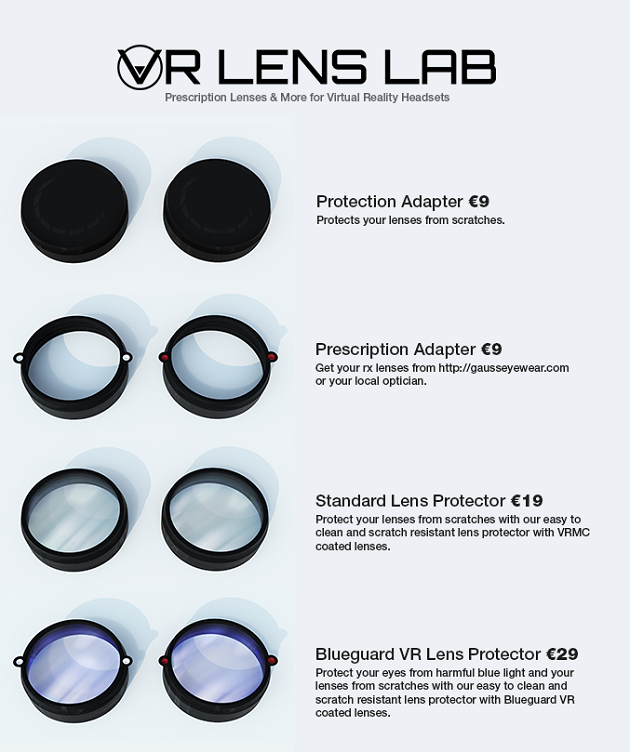 For owners of the Samsung Gear VR mobile head-mounted display (HMD) keeping the device free of dust and abrasive materials that could damage it and affect its performance is important. This is especially so for the lenses, which like glasses can get scratched, thus affecting visual quality and virtual reality (VR) experiences. Now a team from Germany have launched VR Lens Lab and a Kickstarter crowd-funding campaign to protect this vital component.

Created by Jay Uhdinger from VR Cover and Peter Marx from Gauss Eyewear, the pair created VR Lens Lab to bring prescription lenses into your VR headset. The new venture offers two adaptors and two different protection lenses depending on what you require.

The first is a protection adaptor to fit over the Gear VR’s internal lens to stop scratches, and can be backed on the €9 EUR reward tier. The second is a prescription adaptor also at €9 EUR which will accommodate prescription lenses for those who wear glasses (the lenses have to be ordered separately). At the €19 EUR reward tier is the standard lens protector, which features VRMC coated lenses allowing easy cleaning and scratch resistance in one. The final option is the Blueguard VR Lens Protector designed to protect not only the headset lenses but a users own eyes from (claimed) harmful blue light emitted from screens. This tier comes in at €29 EUR.

The prescription adaptor is one of the main features of the project allowing Gear VR owners who use glasses and find the focus wheel doesn’t completely suit their needs, to use lenses catered exactly for their eyes. Prescription lenses can be purchased from Gauss Eyewear after the Kickstarter has finished or from a local optician.

The VR Lens Lab Kickstarter goal is €5000 EUR and will be running for the next two weeks. VRFocus will continue to follow the progress of VR Lens Lab and its project, reporting back any further announcements.