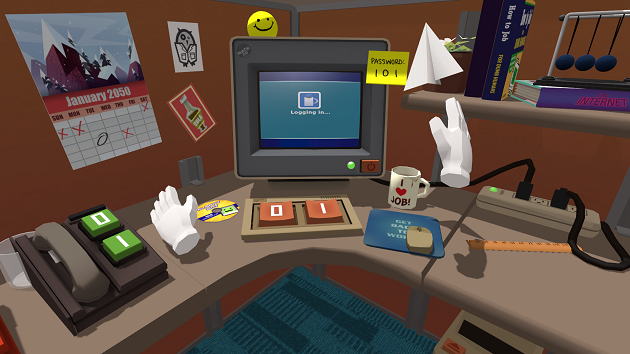 Another day, another job. Owlchemy Labs’ Job Simulator is the epitome of a no-hoper’s career. Chef? Store Clerk? How about climbing the ladder and using your brain for a change? Or not, as once again Job Simulator takes the essence of a day-in-the-life and distils it until it’s almost unrecognisable.

Standing in your diminutive cubicle at your desk, mundane tasks such as filing documents, addressing e-mails, answering phone calls and photocopying paperwork are perhaps the first things that spring to mind. All of these errands do exist in Job Simulator‘s latest job, however as usual they’re not as straightforward as you would expect.

The PC needs to be plugged in before being booted. That’s to be expected right? Best have a cup of coffee while you wait for it to boot. The photocopier copies things. Again, this seems normal for an everyday office job. However, in the robots’ usual unintelligible reasoning, it copies things. Replicates not just their image, but the entire object itself. The donut trolley arrives and there’s only one raspberry cream on board? Not for long.

There are specific tasks that require completion in Job Simulator in order to ‘progress’ (Owlchemy Labs haven’t yet clued VRFocus in as to what successful completion will mean in Job Simulator), but yet again the Office Worker proves that it’s the incidental distractions that make the videogame worth your while. Staple fights, breaking objects on robots, firing the nice guy and keeping the badass in a job; all of these elements and more lead to a great deal of humour.

The latest preview build of Job Simulator differs from that of the Chef and Store Clerk builds not in terms of the gameplay, but the delivery of it. Playable for the first time on the consumer version of the Oculus Rift using Oculus Touch controllers, sadly Job Simulator is a perfect example of why some videogames designed for the HTC Vive won’t translate 100% intact to Oculus VR’s motion-controllers. Occlusion is a big deal for Oculus Touch, and given that a lot of Job Simulator asks the player to turn almost 360 degrees and interact with objects behind them it was certainly a less pleasurable experience on Oculus’ hardware. 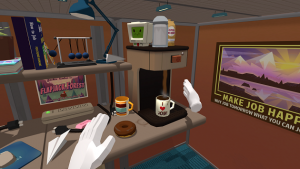 A slight turn too much and tracking would be lost. It’s a simple and straightforward issue, but one which will be very hard to overcome without expecting consumers to invest in additional hardware. The issues didn’t come from simulator sickness and some might expect, but clear-and-simple annoyance: Job Simulator works perfectly on HTC Vive, but the experience is marred by technical issues with motion-input on Oculus Rift.