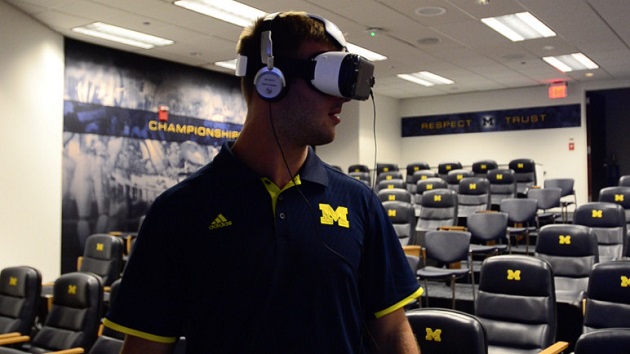 Last month VRFocus reports on the news that The University of Michigan’s athletic department was using virtual reality (VR) content to promote its facilities and offerings. The initiative was said to be piloted by the university’s football program with a series of VR experiences that can be viewed in 360 degrees using Oculus VR’s and Samsung’s Gear VR mobile head-mounted display (HMD). This week sees that experience finally arrive on the platform’s store.

Filmed this autumn, the app takes viewers through a series of videos showcasing the university’s football team. Simply named Michigan VR, the experience can be downloaded for free. It’s not clear if or when more experiences will be added to the app beyond football.

“Experience Michigan Football like never before,” an official description for the experience reads. “360-degree, 3D, Virtual Reality content brings you inside the huddle, on the field and inside the most successful college football program in history.”

The Gear VR itself is currently available in the form of an ‘Innovator’s Edition’ for the Samsung Galaxy Note 4 and Galaxy S6 smartphones respectively. The first consumer-ready version of the device is set to launch next month for $99 USD and will be supporting Samsung’s entire line of 2015 handsets.

VRFocus will continue to follow any and all titles for the Gear VR, reporting back with the latest updates on the platform.