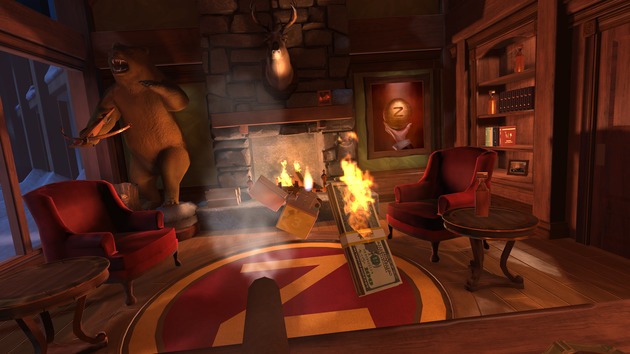 Spectre might have steered the franchise back towards its roots, but the James Bond series is still a very different beast from what it used to be. Gone are the days of space laser beams, villains with metallic teeth and death by piranha pits. If you still long for that kind of cheesy goodness, however, you may well be interested in I Expect You to Die, Schell Games’ anticipated Oculus Rift debut that’s now sporting the Oculus Touch position-tracked controllers.

You may well have already sampled I Expect You to Die’s first level, available now to download on Oculus Share. At GDC 2016, however, Schell Games had a brand new challenge for people to tackle. It still keeps the basics in place; this a first-person puzzle-based experience where players will have to methodically make their way through challenges, avoiding traps and attacks that hide around every corner.

The setting this time is the snowy cabin hideout of Dr. Zor, an archetypal evil mastermind who’s left plenty of dangerous obstacles for players to negotiate in his absence. Cast as a secret agent and aided by a typically English assistant on comms, you’re tasked with locating a secret weapon housed inside of the area and destroying it. At first this might seem a daunting task; it’s not immediately obvious where you need to start, but, as with the first level, answers soon start to trickle out with some experimentation.

Oculus Touch controls are something that players should expect of experiences that are heavy on item interaction by now, and I Expect You to Die has put its own touches onto the system, making it something of a hybrid between realistic action and the mouse-based control scheme available in the demo (and eventual full release, it should be said). While you’re rooted to a chair, then, this new system will allow you to hold a trigger to bring up an aiming reticule. Anything that can be grabbed will be highlighted in blue – in itself effectively a hint system – and then you can pull another trigger to pick it up, tilting one of the controller’s sticks forwards and backwards to bring it towards you.

This isn’t only an effective way of making the unreachable less so but a far more dependent mechanic to rely on when items need throwing away as opposed to the physical action. That latter part is crucial at one point in the level, when you have to think fast in order to avoid death by dynamited arrow. 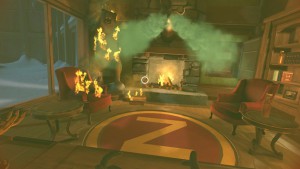 If that last part sounds a little ridiculous it’s because it is. The last thing I Expect You to Die will do is take itself seriously, and you’ll need to adjust your thinking as such to solve some puzzles. The best solutions will often involve the use of positional tracking; physically ducking to avoid rotating lasers is a genuine thrill that puts you right there in the moment in a way that only high-end VR head-mounted displays (HMDs) can. You can even get further into the mood by picking up a cigar and bringing it to your lips to start smoking it, or putting a hat on top of your head to look the part.

Crucial to the experience, however, is balance in puzzle solving and challenge, and it’s not something that I Expect You to Die always pulls off. As mentioned at the start, it’s easy to become stumped very early on in a level, when there are still many pieces to put together. In VR, as with any other emotion, the frustration that comes from this is nearly doubled. It’s a risk any puzzle videogame runs, and Schell Games does leave a trail of breadcrumbs to follow if you keep a level head, but it’s hard to escape the fact that getting stuck on a challenge just isn’t much fun. Quite the opposite, in fact.

There’s also a question of just how far I Expect You to Die will go; Schell Games has revealed two levels and it appears that there are two more to go. With all the solutions figured out, you can get through the first two levels in minutes flat. It’s going to be up to the title’s pricing to make up for any length issues, although you can no doubt add some value to the experience by factoring in just how accessible and approachable it is. VR needs titles that just about anyone can play at this point in time and I Expect You to Die certainly fits that bill.