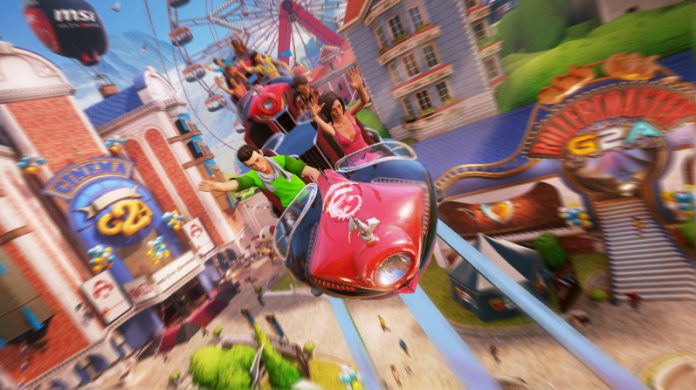 Rollercoasters in virtual reality (VR) are nothing new. Many readers of VRFocus have stated that their first experience of the Oculus Rift – for better or worse – was with either a simulation of a rollercoaster or a recording of a real-world ride. VRFocus‘ first experience of G2A Land was remarkable not in the fact that it was a VR rollercoaster, but in the quality of its design.

G2A has incubated a reasonably sized team of experienced developers at its Rzeszow office with the singular goal of creating a unique VR videogame. There is no other software development team at G2A – no discussion of additional platforms or web based content – aside from that which manages its online marketplace. G2A Land is a step into brand new territory for G2A, and one which demonstrates a company which believes that the technology is more than just a flash-in-the-pan.

G2A Land is considerably more than just a rollercoaster. With additional months of development since VRFocus‘ first play of the software the internal development team at G2A have added a number of new attractions, each mirroring the commendable quality of the debut experience. Framerate, resolution and control systems compliment that of some of the best titles Oculus VR has chosen to show as its own exclusive releases, and rightly so as G2A Land is not without budget.

The aforementioned rollercoaster aspect of G2A Land is a well balanced VR experience, for which the development team tells VRFocus that constant redesigns of the track’s corners and speed were essential to ensure that any possible instances of simulator sickness were reduced. A second motion-based experience, an underwater exploration in a one-man vessel, is currently undergoing similar rigorous testing. The former takes you high into the sky above the theme park which plays host to each of G2A Land‘s disparate gameplay opportunities, the latter deep into a cavern filled with ancient ruins and sub aquatic beasts. For both of these experiences ‘gameplay’ is used in the loosest of terms; though the latter offers some small amount of interactivity in the use of a light to solve lukewarm puzzles, neither is truly designed to promote player input. That is reserved for two further attractions.

Elsewhere in the titular G2A Land, an expansive, colourful VR theme park which can be freely explored, players will find a shooting gallery and a science-fiction adventure. The former is a simple recreation of its real-world counterpart: a western themed point-and-shoot wherein the player is armed with a pistol and aiming for a high score. An enjoyable experience, though lightweight, the shooting gallery does well to compliment the less interactive elements of G2A Land. 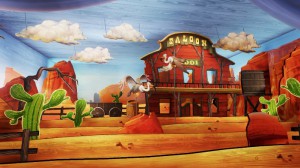 The science-fiction adventure, however, is currently G2A Land‘s pièce de résistance. Though the development team assured VRFocus that there’s plenty of work still to be done, the slow pace of the outer space adventure mixed with exploration, logical puzzles and first-person shooter (FPS) combat makes for an incredibly enjoyable ten minutes. It’s very much the hope that G2A will explore this element of G2A Land further, building on its atmospheric design and simple telekinesis mechanic with additional levels or even a random level generator offering the same puzzles as different set-pieces. Having the player enjoy their time in G2A Land is not a difficulty even at this early stage, getting them to return to the same attraction more than once may prove to be a bigger issue.

Being developed by a company whose primary goal is a consumer marketplace, it would be remiss not to discuss G2A’s market proposition for G2A Land in any preview coverage. The intention is to launch the software as a free download, monetising through in-game purchases. However, this is not a free-to-play title in the traditional sense; we’re not talking micro-transactions. G2A’s intention is to deliver a version of their marketplace through G2A Land; a VR store in which consumers can browse and buy the same selection of titles that are available on the browser based store. While G2A’s prices are most certainly appealing – often significantly lower than buying directly from the likes of Steam, Xbox Live and PlayStation Network while still being fully compatible with those services – exactly how G2A intend to present their marketplace in VR is still underwraps. VRFocus will be following G2A Land closely in the run-up to launch, reporting back with coverage of new attractions and details of that all important monetisation strategy.