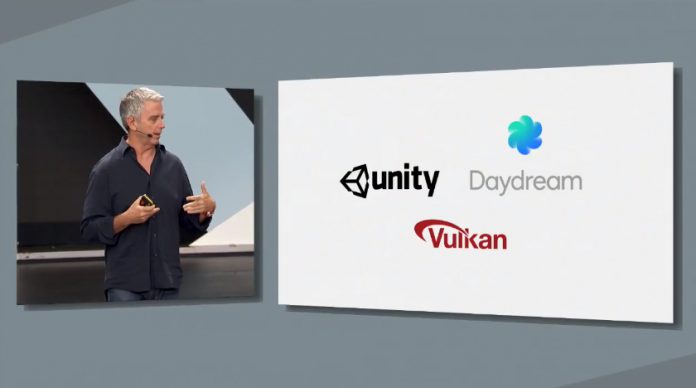 There’s been quite a lot of information to take in from the recent Google I/O conference in Mountain View, California. One of the biggest announcements centred around the unveiling of virtual reality (VR) head-mounted display (HMD), Google Daydream, along with a controller and associated software. Clay Bavor, Vice President of Virtual Reality at Google broke the major news, but he also brought on-stage software development partners, one of which was John Riccitiello, CEO of Unity Technologies, who revealed how many developers were using the company’s middleware.

During his speech Riccitiello said: “From the beginning, our orientation to supporting the developer has brought us a fairly sizeable audience…..5.5million developers, that’s a large number of people using a game engine.” He added: “These developers, in aggregate, produce games that are downloaded six to seven hundred times per second, 1.6 billion times per month.”

With that number of developers using the Unity engine, it makes sense for Google to be partnering with Unity Technologies, integrating the software with Daydream as well as Kronos’ Vulkan API. Support for Vulkan will be arriving in Q3 2016.

But Google wants as much third-party support as possible, as a bigger selection of content usually means the better the platform is likely to perform. So the tech giant also brought on board Epic Games’s Unreal Engine, as this then secures a massive swath of developers that could produce content for VR.

If you’re a developer who’s looking into VR development then you can get started straight away. Google’s released details on creating your own Daydream development kit using a Nexus 6P smartphone and a Cardboard headset.

VRFocus will bring you the latest details on Google Daydream as we get them.