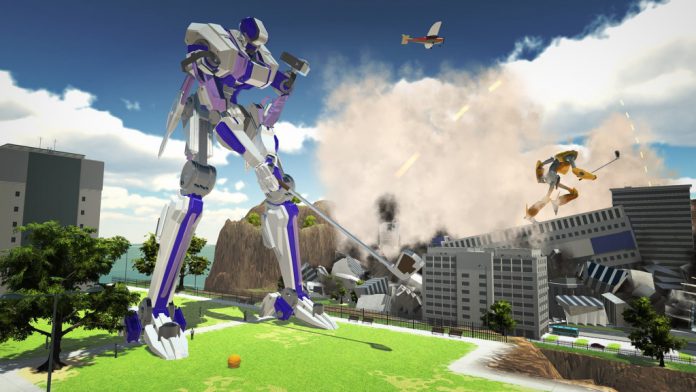 Golf, it isn’t a sport to everyone’s tastes either playing or watching, but it’s a sport represented countless times in videogames over the years. And virtual reality (VR) has got its fair share of contenders, HTC Vive has Cloudlands: VR Minigolf and Oculus Rift has Minigolf VR two name a couple. Sony Interactive Entertainment’s (SIE’s) PlayStation VR on the other hand, has gone big, brash and skyscraper high with a no holds barred arcade title called 100ft Robot Golf. Massive robots and the slow genteel game of golf don’t naturally sound like an ideal mashup, but if its going to work, then it’ll be in a videogame, and a VR one at that.

The demo presented on SIE’s booth at E3 featured just one level, a sprawling city landscape that still included all the usual golf course additions you’d expect, water obstacles, sand banks, rough grass and a fairway. But as you might expect for a videogame with 100ft Robot Golf as a title there’s some extras in deal with as well. There’s mountains to manoeuvre round, skyscrapers to avoid and an opponent that can cause you some issues.

Jumping into the game, you’re put on the back of one of these titular giant robots. In a kind of third-person view, you can see your robot in the bottom portion of the screen, look around with the headset or use the right analogue stick as well. Over to my right was a hulking green and purple robot resembling the characters out of Japanese animated television series Neon Genesis Evangelion. The opponent would play through the hole at the same time, trying to beat me in the process. As each shot is taken the two characters naturally converge along the fair way, bringing another element to the videogame, melee combat. It only very basic but it allows players to attack each other and slow down shots, giving a brief advantage to get to the hole faster. The other aspect of the melee functionality is that of destroying your surroundings. Building in the way, well you’re controlling a 100ft robot with a massive golf club, time to remove that annoyance and continue on.

The actual functionality of choosing your shot and hitting the ball will be familiar to anyone who’s played a golf videogame in the past. Stand at the ball to activate the directional arrow and get a viewpoint of where it going to land. Once you’re happy with the spot you can then bring up the power gauge. The PlayStation 4’s DuelShock controller is digitally represented in-game and the duel power gauge extends from out of the top. One side activates first and two arrows either of the gauge show you where to stop each power meter. There’s also a wind speed and power arrow built-in for further environment info.

Having played the shot its time to move on. You have complete control over where you can walk, you’re not taken to where the ball is. This gives you time to smash stuff, your opponent or take to the skies. Yes these robots can not only jump but fly, giving the ability to get a birds eye view of your surroundings and unleash more devastation. While unable to use in the demo, the right trigger button did show the option of rockets, which are always needed when playing golf.

There’s a lot to like about 100ft Robot Golf, its unashamedly over the top, and while it would work just as well as a standard PlayStation 4 title the VR aspect makes you’ll feel far more connected to your character and surroundings. Just a videogame based on this demo should be immensely enjoyable, but there is more to come as developer No Goblin has plans for a story mode and customisation options. 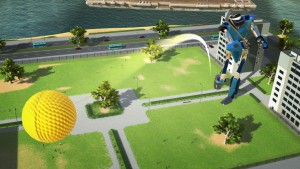