Have a look at this panorama stitched with Autopano Giga 3.7.1: nice scenery, beautifully stitched but if you take a closer look you can see some vignetting in the sky. This phenomenon happens sometimes with big panoramas, especially in blue sky. 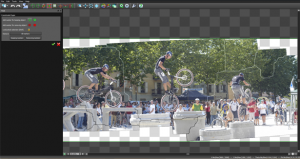