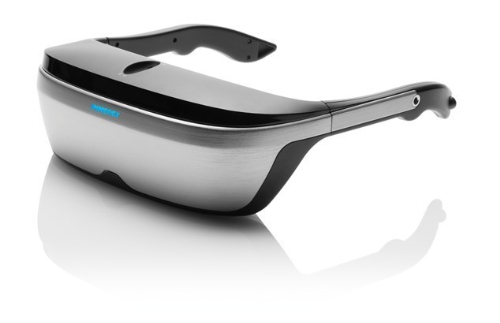 The annual Electronic Entertainment Expo (E3) got underway in Los Angeles today. Whilst many virtual reality (VR) development companies such as Oculus and Sony are using the show to showcase their peripheral devices including Oculus Touch and the Aim Controller, having used previous shows to familarise us with their headsets, Immerex is a new company taking its first steps into the field.

Immerex is a new VR company that says it creates cinema-centric VR experiences, combining “proprietary hardware, software and professional quality content to take virtual reality beyond gaming and into the hands of movie lovers around the world.” The company is using E3 to launch its end-to-end virtual reality solution and next generation VRG-9020 head-mounted display (HMD).

Immerex says its headset can be used for a wide range of entertainment experiences, from films and videogames to apps. The VRG-9020 HMD has a compact and modern design that’s notably more streamlined than many of the heavy-duty high-end VR headsets currently available which Immerex say is to enable on-the-go virtual reality experiences.

Rather than connecting to a computer, the VRG-9020 connects to a small VR media box which uses Immerex’s proprietary SDK to power its VR content as well as conventional 2D and 3D films. The headset comes with a headphone and full in-line controller, though users can also use their smartphone as a controller by connecting it to the headset via Bluetooth.

Adam Li, CEO and CTO of Immerex said that his company “is solving many of the VR limitations our industry has experienced by going beyond the gaming vertical and addressing the demand for more content, portability and HMDs that are not bulky and uncomfortable,” going on to assert that the “future of VR depends on making content for virtual worlds and at Immerex, we combine this understanding with proprietary innovation, an elite team and global partnerships to accelerate access to immersive entertainment.”

Through a variety of strategic partnerships, Immerex claims it has direct access into China’s growing entertainment industry and the country’s large investments in film and television production. Kirin Li, Head of Immerex China said the company has “deep collaboration with partners covering more than 65 percent of China’s movie box office. These resources uniquely position the company as a key VR player that is primed to ignite growth within China’s VR ecosystem.”

Immerex’s headset has no confirmed release date or price point just yet, but at launch the company promises it will offer users an extensive VR content library with a strong emphasis on cinema, as well as gaming and applications.

The company is showcasing and demoing the VRG-9020 on the E3 show floor, and VRFocus will report more news on the new headset as it’s announced.