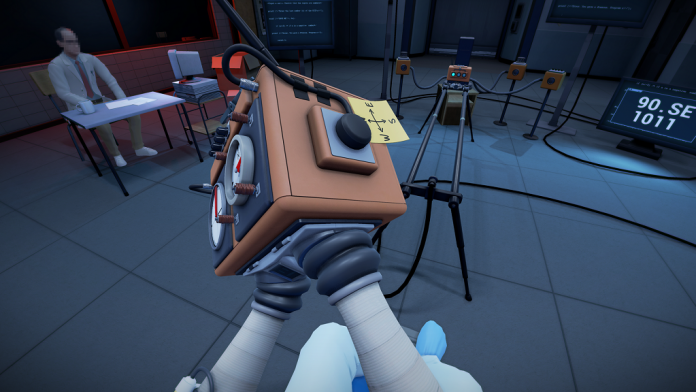 Puzzle videogames give a great introduction to virtual reality (VR) as they’re usually slow paced, informative and involving without being straining. Titles such as Esper/Esper 2, Keep Talking and Nobody Explodes, Please, Don’t Touch Anything! all showcase how immersive this genre of VR videogames can be. In development  for Sony Interactive Entertainment’s (SIE’s) head-mounted display (HMD), PlayStation VR, is an innovative title which was recently revealed called Statik.

Being developed by Swedish Tarsier Studios, Statik is a compact puzzler where players find themselves sat inside a laboratory with a strange metal box attached to both hands. On the outside of this box are various switches, levers and lights all forming a part of one puzzle. Looking around the room you’re located in, you see various black and white boards with shapes on and a central orange and black board with a myriad of interlocking shapes.

As you adjust to your surroundings, looking at the casing around your hands you’ll notice an ominous doctor looking figure, but their face is pixelated out. There’s no indication of who they could be or why it looks like you’re looking at them through a monitor or TV, it’s all part of the mystery and storyline.

Static makes innovative use of the PlayStation 4’s DuelShock 4 controller, as it represents the mechanical box that you must solve. Using the PlayStation Camera, Statik tracks the controller enabling you to twist and turn the box to see the three sides with each of the various interactive objects. As you look at each in turn they can be operated by the Duel Shock’s D-pad, thumb sticks, face buttons and shoulder buttons. Each operates a different feature on the box, for example the D-pad operates a small orange robotic arm, up and down moves the arm in that corresponding direction while left and right makes it grab either side. The right trigger opens a panel in the top left of the front face, while the left stick moves and rotates an arm that can unscrew bolts. Everything has a particular function, with each needing to be used at certain times or in a particular order.

It’s this complete functionality of the controller, with each button or stick operating a different part that provides another element to Statik. While you’re trying to figure out what to do next, or first, there’s the memory factor. Getting used to which control does what, you then need to remember what does what across eight buttons, two thumb sticks and the D-pad. While only one level was available to demo, subsequent levels will reset what you’ve learnt previously, offering new controls and new processes to remember. 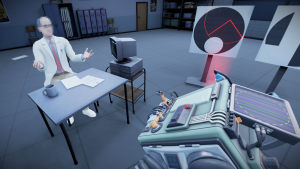 The PlayStation VR demo was the same level Tarsier Studios released in the first trailer at the start of June 2016 to give you a better understanding of what this all looked like. The main function of the demo puzzle was to choose the appropriate disc featuring a shape, align it correctly and shine it on the corresponding board in front of you. Once you’ve done this with each black and white board, you then combine them all together to work out the final mixed board. There’s also a hidden one located somewhere in the lab to make the process that little bit more complicated.

The whole process is engaging and enjoyable, showing a lot of promise. The overall simplicity works in Statik’s favour and if Tarsier Studios can get the level and difficulty progression design right then this is one title that VR puzzle fans should keep an eye on.