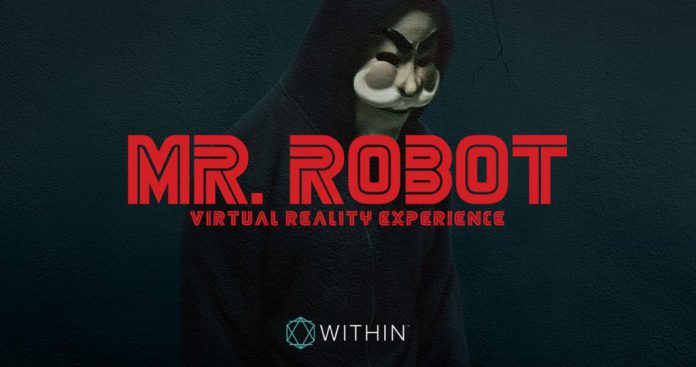 This year’s San Diego Comic-Con played host to an interesting virtual reality (VR) experience based on the hugely popular Mr. Robot series. A prequel to the series written and directed by Sam Esmail and starring Emmy nominee Rami Malek, the 12-minute feature was suggested to be available for one day only. However, distributor Within has since revealed that the VR video will be coming to ‘multiple VR apps’ soon.

Created with Chris Milk and Patrick Milling Smith’s pioneering VR production company Here Be Dragons, in partnership with Universal Cable Productions, the Mr. Robot VR experience provides viewers with one of the first extended narrative pieces of television content in the VR medium and offers an inside look at lead character Elliot’s backstory.

“The MR. ROBOT VR Experience and simulcast premiere are unlike anything we’ve ever done before,” said Milk. “Sam has brought his vision and voice as a filmmaker to this new medium, helping build a foundation for what narrative storytelling can feel like in virtual reality. At Within, we’ve been looking for ways to make VR a more social and communal experience, and connecting thousands of fans across the country to the same experience at the same exact time is a giant step towards that goal.”

Following the initial viewing at San Diego Comic Con the content will disappear online but be available exclusively at a MR. ROBOT Comic-Con pop-up storefront experience (343 4th Avenue, San Diego, CA) – an authentic replica of the Mr. Robot Computer Repair Shop from the series. There, fans will enter the interior of Elliot’s apartment to experience the VR scene. Additionally, in partnership with Uber, San Diego Comic-Con attendees will be able to request on the Uber app that the VR experience come to them directly, via Mr. Robot Computer Repair Shop vans.

Following Comic-Con the experience will be rolled out wide across multiple VR apps and platforms, including the Within app, Facebook 360, YouTube 360 and New York Times VR. No date has yet been announced for this global release, however you can be sure VRFocus will keep you updated with all the latest details.