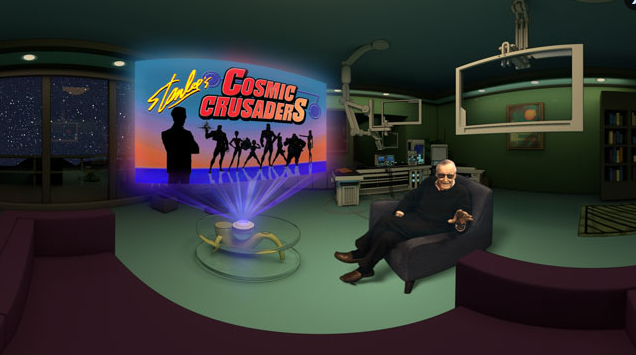 Based on a concept by Lee, written by Deadpool co-creator Fabian Nicienza and co-produced by global brand management company Genius Brands International, Stan Lee’s Cosmic Crusaders will debut on THR.com this week with the VR episodes premiering today on the Hindsight VR app, through Android and iOS platforms.

Lee will be one of the show’s main characters, and the 75-year veteran of the comic book and film industry will edit and voice himself.

“I can’t wait for everyone to see what the wizards at Legend 3D created for our new series Cosmic Crusaders!” Lee said in a statement. “Turning me into virtual reality, wow, what will they think of next? This is truly a unique experience for both me and comic book fans. You won’t want to miss this!”

Legend VR has also revealed the promotion of the series’ VR producer Will Maurer to Vice President of Business Development for its standalone VR and VFX divisions.

“The voracious consumer appetite for good VR content, coupled with the excitement behind Stan Lee’s first VR experience, has made this one of the most anticipated experiences of the year,” said Maurer, who created the virtual reality experience for Cosmic Crusaders.

In the role, Maurer will help build and grow Legend’s VR and VFX service offerings. Previous VR content has been created for clients such as Lionsgate, Warner Brothers, Apple Music, Annapurna Pictures, Hulu, and Tidal.

“At Legend VR, we are keenly aware that virtual reality is transforming the way audiences consume and enjoy media,” Maurer said. “We offer a truly soup-to-nuts solution for clients looking to delve into – or solidify – their position in the virtual reality marketplace, and working with the incredible and groundbreaking Stan Lee on this project has been an unparalleled experience for our team. We’re thrilled to work with Stan to bring his vision for Cosmic Crusaders to life in virtual reality.”

For all the latest VR new keep reading VRFocus.