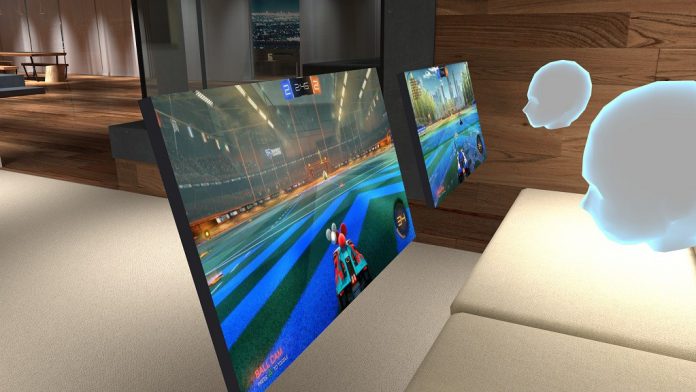 If you’ve got the HTC Vive or Oculus Rift head-mounted displays (HMDs) and you want to utilise the full functionality of your desktop PC, then you’ve got a couple of options. There’s either Virtual Desktop from indie developer Guy Godin or there’s BigScreen Beta from BigScreen Inc. The latter has recently launched a new update for the software, bringing with it new features and fixes.

One of the main additions included in BigScreen Beta 0.2.0 is HTC Vive controller support. This now means players can use the controllers in singleplayer and multiplayer, the controllers can resize and move the monitors, used as a mouse on your desktop, use the SteamVR virtual keyboard to type and turn them into laser pointers. A video showing these new features can be seen below.

Also included in the update is a new streaming code, in the BigScreen Alpha. BigScreen Inc. lists the following fixes:

Some multimonitor setups couldn’t stream video/audio. This is fixed

Some multimonitor setups were displaying one monitor, but streaming a different monitor. This is fixed

The developer has added 3D Side-by-Side Video, enabling players the option to watch 3D movies and videogames in either 3D Side-by-Side (SBS) and 3D Over-Under (OU) modes. There’s an offline Mode allowing the use of BigScreen in singleplayer without an internet connection. And lastly X-Ray Vision, making it easier to locate other players in the virtual apartment, by adding a ghost/outline.

BigScreen Inc. does add at the bottom of its update posting: “Please test the BigScreen Alpha’s streaming code! If that goes well, we will be able to release desktop audio streaming in a week.” The software is completely free to download and tryout.

VRFocus will continue its coverage of BigScreen Beta, reporting back with any further additions.