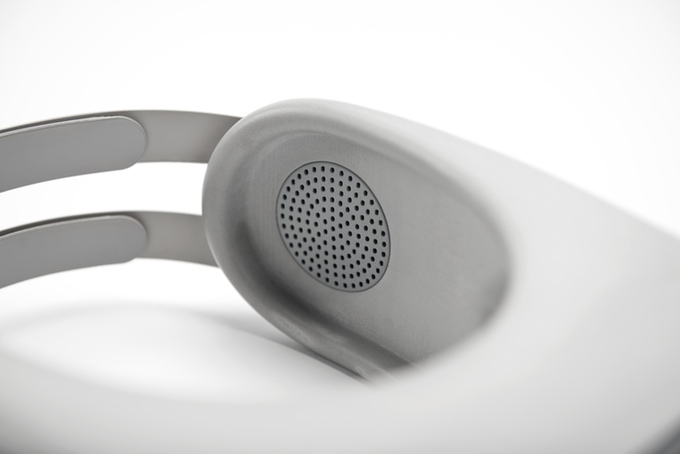 There’s a multitude of different mobile head-mounted displays (HMDs) on the market, all of them offering slightly different design features. Google Cardboard goes for shear mass market appeal by being cheap, while the Samsung Gear VR goes for the higher end by offering greater comfort and control. What none of the mobile devices offer is built-in sound which is where Opto comes in.

Currently running a Kickstarter crowd-funding campaign to raise £40,000 GBP, Opto is a British firm that’s aiming to bring an all-in-one VR experience to smartphones by integrating speakers into the headband. Users activate VR content on their device, insert it into the magnetic front cover of the HMD, then attach the headphone jack to enjoy fully immersive videogames, movies and other content.

Created from lightweight foam rather than hard plastic or cardboard, Opto aims to be both comfortable and durable, withstanding knocks and bumps. It’s also compatible with any smartphone with a screen size between 4 – 5.5 inches.

With only a couple of days to go Opto is currently sat at £37,911. Rewards start from just £1 but to get yourself a headset you’ll need to head to the £65 reward tier. Higher tiers add multiple devices with a small multi-buy discount.

Opto has been created by Tom Jarvis an industrial designer and Richard Stephens a software developer, both of whom run a product design agency called Original Breed based-in London, UK.

VRFocus will bring you further details of Opto’s Kickstarter campaign as updates are released.