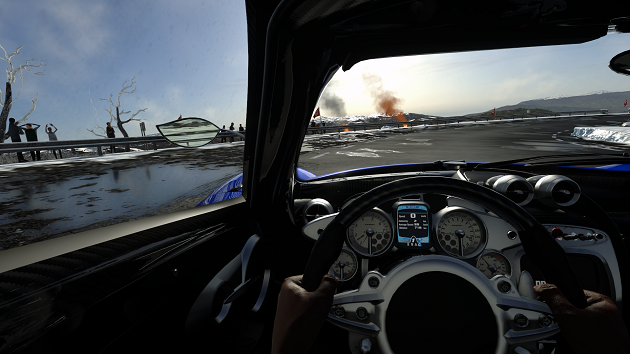 Over the course of 2015 Sony Interactive Entertainment (SIE) at certain shows showcased its PlayStation VR head-mounted display (HMD) with a virtual reality (VR) version of Driveclub. SIE constantly stated that Driveclub was only a tech demo to highlight what the headset could do to external developers, but now a new listing on the Entertainment Software Rating Board (ESRB) website indicates there might be a full release down the line.

Driveclub VR as its listed on the ESRB site has been given an ‘E’ rating for everyone. While its appearance doesn’t guarantee that SIE are planning a full commercial release of the title, that fact that companies have to pay to get videogames rated means that there’s a strong possibility of seeing Driveclub VR arriving on PlayStation VR. If it was just a tech demo way pay to get it rated?

VRFocus got its hands on the racing simulator tech demo back in December 2015. At the time the demo featured just one track and one car in a race with 8 on the track. The ESRB rating summary gives hints that Driveclub VR is getting more features:  “This is a racing simulation game in which players drive a variety of cars around real world locations. Players can engage in traditional races, time trials, and drifting challenges.”

There’s been no official confirmation yet from SIE on a possible launch for Driveclub, but VRFocus will bring you further details as soon as possible.