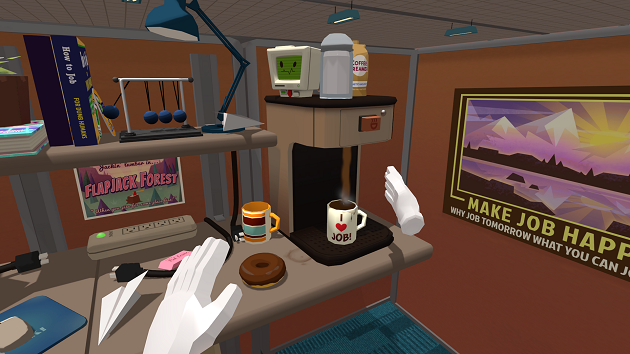 Owlchemy Labs has already enjoyed one big announcement this month. Back at the 2015 PlayStation Experience in early December it was confirmed that the studio’s much anticipated virtual reality (VR) videogame, Job Simulator, would also be coming to the PlayStation VR head-mounted display (HMD) for PlayStation 4 alongside the already confirmed Oculus Rift and HTC Vive version. It would appear that the team has another unannounced project in the works, however, which it has today teased will be revealed at some point next year.

The developer teased as much in a tweet in which it also announced that North Star Games’ Andrew Eiche had joined the team to help it work on the project. “Happy to say our long-time Unity bud Andrew Eiche @buddingmonkey is joining Owlchemy to head up a sweet VR project to be announced next yr!” the developer wrote. No other details were offered up on just what this mysterious project might be and which VR platforms it might be coming to, though, with Job Simulator on its way to all three major HMDs, it’s anyone’s guess as to where it could end up.

For now, VR fans still look forward to Job Simulator itself, which imagines a future in which robots have taken over all forms of work, creating a simulator to allow humans to experience what it must have been like to work ordinary jobs. Using either the HTC Vive’s SteamVR position tracked controllers, Oculus Touch or PlayStation Move, players can joyfully mess around in once mundane environments. Exactly when the title will launch is unclear, though expect it to arrive sometime in 2016, with each of its target platforms set to release before next July.

For the latest updates on Owlchemy Labs, stay tuned to VRFocus.