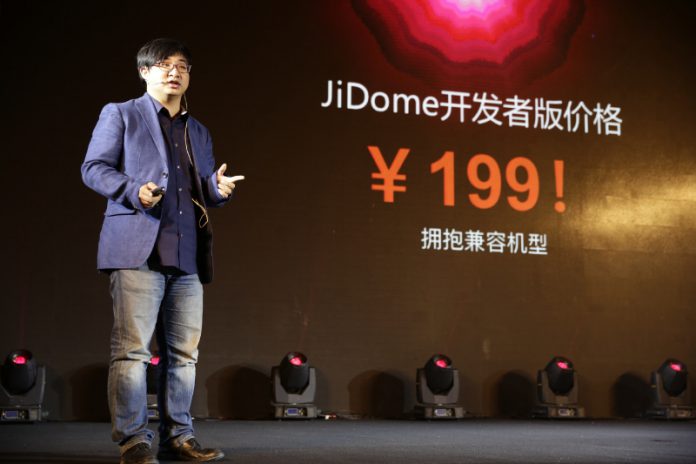 With the Gear VR mobile-based virtual reality (VR) head-mounted display (HMD) now available for consumers to pick up, competition for the device is likely to quickly gain steam. It arguably already has a major rivalry with Google and its Google Cardboard DIY HMD concept. Today sees the reveal of a new competitor, however, that’s aiming to match if not surpass Gear VR in terms of specs while also beating it in terms of price. That competitor is a new HMD named JiDome-1 from Chinese company FiresVR.

Revealed today – though no image of the device can currently be found online – JiDome-1 is said to be compatible with all mainstream mobile phones and can adapt for different sizes. It features a 9-axis gyroscope with a proximity sensor, buttons for interacting with experiences, and an air-cooling system. It’s set to launch for developers Q1 2016 for 199 RMB, which is close to $30 USD. The consumer version, however, will launch in the second quarter, with a final price yet to be revealed.

“JiDome-1 has adopted an ATW algorithm similar to that of GearVR, but to date not all Android phones support it,” a press release for the new kit explains. “Compatible phones must have GPUs that support API of OPENGL ES3.0 or higher, with overall performance equivalent to or better than Qualcomm Adreno 310 (a GPU built into the Qualcomm 801 platform). This means that JiDome-1 is only adaptable to 30% of mobile phones currently on market, but the proportion is expected to exceed 50% in 2016, driven by natural iteration on the mobile phone market.”

For the latest updates on all VR HMDs, keep reading VRFocus.

The post JiDome-1 is China’s First Answer to the Gear VR appeared first on VRFocus.