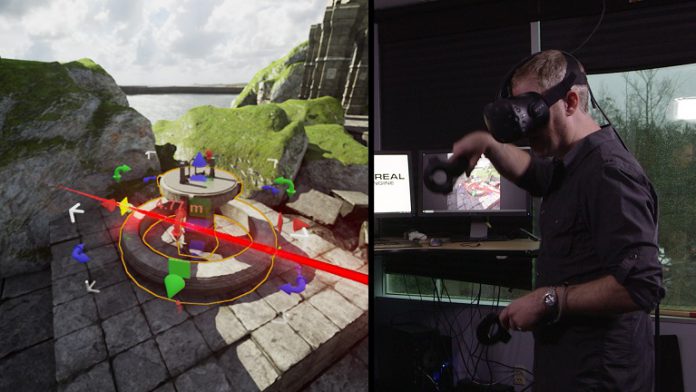 Epic Games today announced a perhaps inevitable new feature for their highly acclaimed videogame engine, Unreal Engine 4: a virtual reality (VR) based development suite. Dubbed ‘VR Editor’, this new feature allows developers to place assets and attribute conditional variances whilst in VR. The addition marks a new phase for the company which has made no secret of its fondness of VR, but what does it mean for videogame developers outside of Epic Games?

The implications of a VR development suite may seem obvious to those already invested in the medium, but no doubt there are ideas about the intricacies such a system can and cannot provide that simply won’t align with Epic Games own ideals. The basic principles of being in a VR environment of your own creation and being able to pick up and move items, characters and geometry as if it was a puzzle piece placed incorrectly upon a table should appeal to all; the immediacy of such a process is practically a no-brainer.

For object manipulation, Nick Donaldson, Environment Artists & Level Designer at Epic Games, stated that his team ‘have gone to great lengths to ensure that it doesn’t feel as though you’re sliding around the world’. The user simple uses the trigger on the base of the HTC Vive controller (Oculus Touch compatibility has been confirmed, but controls are not yet revealed) to pull the world hand-over-hand, similar to a length of rope. A teleport is also available, and zoom is performed in a similar manner to that of a touchscreen device: pinch and pull apart to zoom-in, together to zoom-out. The user can push and pull objects, grab and move to any location they desire within the world, as well as adjusting the scale of any item while holding it. VR Editor essentially makes videogame assets an elaborate LEGO playset, which is undeniably a huge step forward for VR development.

“One of the advantages of being in virtual reality is we have the ability to truly understand the scale,” stated Donaldson on the Epic Games livestream revealing VR Editor today. This, quite simply, is the finest definition of what VR Editor will offer VR development: immediacy. “You can look around and see what feels good; what feels natural.”

“It’s actually easier to work with things in your hands at a train model scale, then work them back up to the size you need,” offers Donaldson.

Just as Oculus VR’s Oculus Medium brings sculpting into VR and Tiltbrush allows artists to examine their work in 3D space, VR Editor brings level design within the HMD. The user can simply ‘be’ in the world their creating. Opposed to requiring the designer to build on a traditional 2D monitor before donning the HMD and entering their creation, the user can adapt and adjust the world they have created in real-time from the exact same perspective the eventual videogame audience will see it. 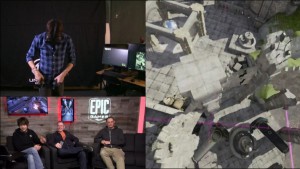 But what about adding properties to such items? What about collision? Physics? Dialogue? What about the abilities and effects of the player themselves?

For properties such as this Unreal Engine 4 made waves in the development community with its ‘blueprints’ system. While experienced programmers are still able to code manually, beginners are given a series of tags to attach to geometry, items, characters or events that take command these attributes for them, essentially cutting out a lot of the hard work. For example, in the case of a first-person shooter (FPS) videogame, a blueprint can be attached to a weapon that automatically runs checks to see when the trigger is pulled (upon a button press by the player) and subsequently checks every frame for collision between the shot fired and the hit boxes on character models or other assets. It’s a simple case of adding a blueprint to the weapon that detects input, and one to the resulting consequence. All of this is built into the engine as standard, with the development team simply having to add their own assets (along with any special rules they desire) to the basic blueprint formula.

With Epic Games’ new VR Editor, this process was demonstrated by a simple menu system (as can briefly be seen in the video which accompanied the announcement). The user can adjust properties such as materials and lighting, however deeper rulesets have not yet been discussed. Epic Games CEO, Tim Sweeney, stated that the release version of VR Editor will launch with ‘key pieces’ of Unreal Engine 4 included, but frequent updates will see the toolset expand. No further information is available, but it would be easy to predict that Epic Games already have plans for this addition in time.

Until VRFocus is able to get hands-on with Epic Games’ VR Editor, it’s impossible to tell just how beneficial the development suite will be in the long term. It’s an undeniably cool piece of tech, and extremely clever of Epic Games to have made moves on this first – hosting their reveal long before the competition have even begun discussing their plans for in-VR development – though it’s time that will truly be the test of the efforts the VR team have gone to in creating VR Editor. Once we eventually VR software released having used it in their creation, we’ll see the benefits of VR Editor.

The post In-VR Development: Changing the Future of Videogames appeared first on VRFocus.