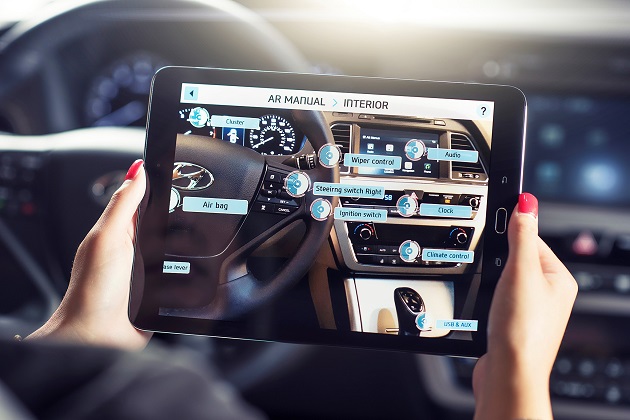 Car manufacturers have been experimenting with augmented reality (AR) technology for a while now. The tech is starting to feature in heads up displays (HUDs), giving drivers information without taking their eyes off the road. Now South Korean manufacturer Hyundai is using AR for its user manuals, condensing what can be hundreds of pages into one user friendly app, Hyundai Virtual Guide.

The Hyundai Virtual Guide which launches later this year on Android and iOS includes 82 different how-to videos. The videos cover everything new owners would need to know, from oil changes to air filter replacements to Bluetooth phone pairing. There’re approximately 50 extra informational guides that can help owners get the most of the car, so long as its a 2015 Hyundai Sonata. The company will be adding further models after the app launches, reports Cnet.

There are six 3D images built into Hyundai’s AR app. Users scan an area of the car, like the dashboard or the engine bay, and the Hyundai Virtual Guide will highlight various sections offering relevant information for that area. For example scan the engine bay and click on “Engine Oil,” and the app will begin a video showing how to measure the oil level by looking at the dipstick.

With the way AR is progressing and large sections of the population owning a smart device, other car manufacturers may also see the technology as a useful step away from big bulky paper manuals.

VRFocus will continue to bring you all the latest news on AR technology, reporting back any announcements.