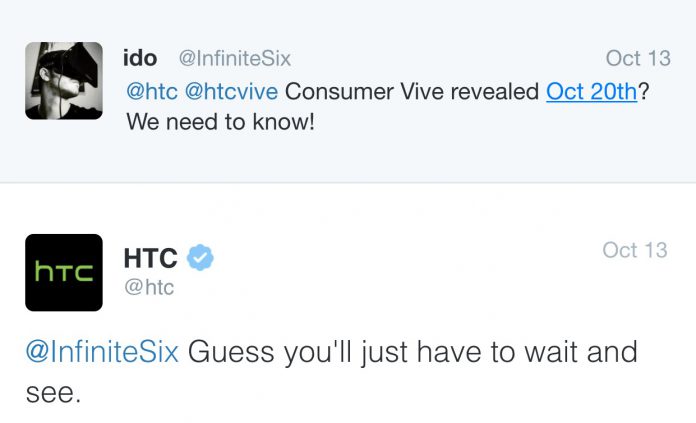 A few weeks ago VRFocus reported on the news that HTC would be hosting a virtual event to reveal a brand new smartphone on 20th October 2015. The company sent out alerts for a livestream for the show marked ‘#BeBrilliant’, which also suggested that the new HTC One phone will be running the latest version of the Android operating system (OS), 6.0 Marshmallow. Inevitably, the virtual reality (VR) community has also been speculating as to if the show could reveal new details about the consumer version of the HTC Vive head-mounted display (HMD). Now HTC itself has seemingly added fuel to the fire.

VR enthusiast InfiniteSix recently took to Twitter to ask the official account for HTC if fans could expect to see consumer HTC Vive information on the 20th October. The company seemed to reply “Guess you’ll just have to wait and see.” That said, it appears the company has since deleted its reply, but not before it could be screen capped as seen below. However InfiniteSix did later note he would be taking the day off of work for the event, to which the company replied “We’ll be stoked to see you there,” seemingly acknowledging the previous conversation.

While HTC hasn’t mentioned any possible HTC Vive reveals for the upcoming event, it also didn’t do so for its official reveal back in March 2015 at a show that was largely thought to only be revealing the HTC One M9. The company has promised that consumer info for the device, which is made in partnership with Valve, will be arriving this month and this does sound like as good a place as any to reveal the news. The HTC Vive is expected to have a limited launch in 2015 followed by a wider release next year.

VRFocus will continue to follow the HTC Vive closely, reporting back with any further updates on its progress.