Coatsink Software has a lot going on in the virtual reality (VR) realm right now. The UK-based indie developer has already released its first VR videogame, Esper, onto the Gear VR mobile head-mounted display (HMD), and plans to release a port for the Oculus Rift come its consumer release next year. Meanwhile the team is already working on a sequel, Esper 2, which has been expanded with new puzzles, locations, and some impressive voice talent. Finally, the developer is helping Boneloaf bring its ever-popular multiplayer brawler, Gang Beasts, to the Oculus Rift. That’s a lot of VR for one studio.

VRFocus recently got to chat with Coatsink Software Designer Jonathon Wilson about the team’s VR slate. Touching upon each of these projects, Wilson talks about the decision to jump straight into the Esper sequel, and how it got started on the Gang Beasts support. He also looks at the position of the Gear VR against the Oculus Rift, and while the mobile HMD could well prove to be just as relevant as its PC-based brother over the next year.

VRFocus: It’s a big time for Coatsink Software. Let’s start with something we already knew about: Esper on Oculus Rift. How’s that progressing?

Jonathon Wilson (JW): So we had a demo at E3. That was like an example of our pipeline of how we’ll do the uprezzing and up-scaling. We’re not redesigning the game in any huge way. It will look nicer and it will take advantage of the positional tracking. What a lot of people we found taking away from E3 was being able to look under the table, looking over the table. That was a big benefit for a lot of people. They seemed to enjoy that.

VRFocus: And you’re still aiming to be a launch title for the Oculus Rift?

VRFocus: Talk about the decision to dive straight into Esper 2.

JW: So following on from the success of Esper. It proved popular on the Gear – it’s only finally been confirmed that it will be available with Gear VR when it launches [for consumers]. Like you know yourself it’s been a bit of a long time that we’ve had a Gear. But it went down really well. We’ve had a lot of interest and it went down really well with Oculus, they liked the idea, they liked the game. So we pitched them the sequel and they said “Okay, we’re happy to get on board with this”.

VRFocus: So how do the concepts of the original game evolve in this one?

JW: So it’s still a first-person puzzle game at its core, that’s never going to go away. This time around you aren’t just trapped in a room. If you’ve seen some of the concept images we’ve put online you’ll notice there’s ruins there, there’s water levels and things. You will move throughout. Like, throughout the chapter you won’t just be locked to one room per chapter, you’ll get to move throughout the environment. It’s not free-form movement; you will still move to a position. So it is interesting, it allows us to create more elaborate environments and tell a bit more through the environment and get a bit more intricate with the puzzles too. 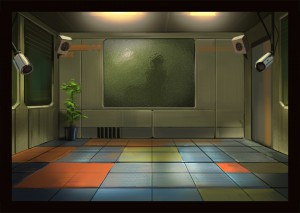 VRFocus: You’ve already mentioned the expanded cast. Who will these actors be playing?

JW: I don’t really want to give too much away about the characters. But you know Eric Meyers is coming back. So if you’ve played the first one you know he was kind of the narrator. So this time around the little synopsis that we’ve given so far is you are an agent this time. And you will go on a little globe-trotting adventure as you do.

And these voice actors are important to us purely because the voice is everything. You don’t see the characters in the game, so we kind of needed a cast of characters that could bring these roles to life. They could convey action. So if you can hear like a disturbance off-screen it’s like you can’t see it but you need to know what’s going on at the same time.

VRFocus: If we don’t see them throughout the game do they play a similar role as to the narrator?

JW: Kind of but it’s more predominant this time. So they will follow you on your journey and it kind of feels more as if they’ve undergone the same things as you like they are actually with you. They’re more than just being someone who’s testing you all the time like there was in the first one.

VRFocus: How is the game progressing visually? You’re not really working on strictly new hardware.

JW: So yeah, it is a little bit of a visual improvement. Like you said, it’s the same hardware, it’s a locked hardware, it’s not a PC by any shot. But it is a [Galaxy] S6, which is bump up. Like, we originally developed on S5s. Esper 1 obviously does still run on an S6. The S6 is only marginally more powerful, so we do get a little bit more texture data but we are looking to improve the resolution of texture so they we can convey more of the detail in the environment. And, having the style that Esper does, it’s not super photorealistic, so we might get away with a lot more on that side of things and we’re stylising a lot more things too.

VRFocus: You’ve mentioned some of the sacrifices you have to make by being on Gear VR and you mention the lack of positional tracking. Is it a challenge to still developer VR games that lack these features?

JW: It is a challenge but Esper 1 never had positional tracking. Like you say, we didn’t build any features on that and we didn’t do it in Esper 2 either because we knew the primary lead platform was going to be the Gear, we didn’t know is the consumer version would or wouldn’t have it. There were rumours everywhere but we now know it doesn’t have it. So once again in Esper 1 in the Oculus Rift version of it you will have positional tracking but there’s no gameplay processes involved around it. 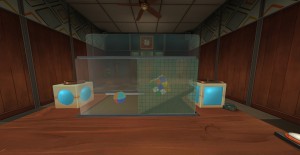 VRFocus: Why are you sticking with Gear VR at that lead platform when we’re so close to the main HMDs coming out?

JW: So when we started development we didn’t know how close CV1 would be. That’s one of the main reasons, but we believe there’s a lot of potential in the Gear VR. It could—it has probably a bigger opportunity to expand into a wider VR audience. It’s an accessory for your phone, a lot of people are going to see this as, which could then draw them into more VR. Like, people who want to use it more often and then develop into Rift.

So to stick with Gear for now is where our original decision was and it was the platform we were familiar with.

VRFocus: Looking at how the original Esper worked, one could assume Esper 2 would find its way to Rift at some point. Is that something you’re thinking about?

VRFocus: You mentioned timescale there. Is Esper 2 out in the near future or have you announced it far ahead of what it comes out?

JW: So it doesn’t have a fixed release date but we would like to target launch window for the Gear VR.

JW: Yeah. It’s going to be a busy couple of months.

VRFocus: What’s it like having those not necessarily pressured but shorter development cycles? 2 games in a year is something.

JW: So if you’ve experienced Esper in any way, you’ve seen the puzzles and things, Esper 1 is a shorter experience where Esper 2 has grown but having a bigger team has allowed us to do more in a shorter space of time. And also we have more budget so you get more experience in which helps and speeds up the development time that you need.

Having 2 games out within a year of each other is good and there’s building skills that encourages you to work harder and work more and more all the time as well. 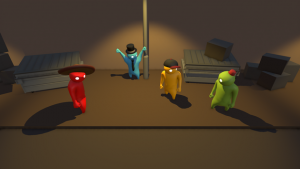 VRFocus: The last project there is to talk about is the very surprising announcement that you guys are working with Boneloaf on Gang Beasts on Oculus Rift. Can you explain how that relationship is working?

JW: So obviously we’ve known Boneloaf, the guys that do Gang Beats, for a while. And we’ve spoken to them at length a lot. At the minute we are primarily going to help them bring it to VR. What that experience entails we’re not really going to discuss that quite yet. It will be more of a multiplayer component. Obviously you don’t want to be getting punched in the face in VR, we’re sure that could be quite jarring. But you will kind of get to see it from a new perspective and manipulate players in a different way.

VRFocus: With all these projects Coatsink really seems like a VR flag-waver at the moment. Is that how you see yourselves?

JW: I suppose it looks that way from the outside, but it’s mainly just the success that Esper’s had. VR’s going down really well right now and it’s going to come out in a big way next year. By the end of the first quarter next year we should have every headset on the market – we’d certainly like to think so – everybody seems to be targeting either the end of this year or Q1 next year. It would be very interesting to see how many more VR studios pop up, but at least we’re going to hit the ground running, we’re going to be there from the start. We’re going to be one of the early adopters and hopefully that will pay off in the long run.

VRFocus: You’ve had tremendous support for Oculus itself. What about Valve and Sony? Do you have a relationship there?

JW: Obviously Coatsink also developed Shu which was a partnership with PlayStation. So yes we do talk to them, we have experimented with PlayStation VR and a couple of the guys from the office have tried Vive. We’re currently waiting on getting the Vive in the office ourselves but, once we get them in and we play about with them who knows what could come up one day.