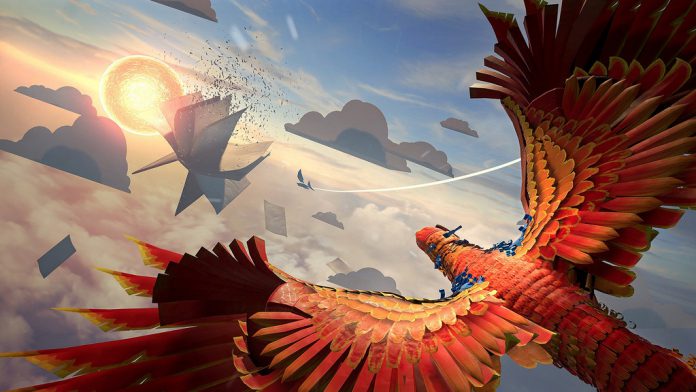 With the launch of PlayStation VR getting closer, more titles are being revealed and the latest to be announced as a PlayStation VR exclusive title is How We Soar, a fantasy flying simulation.

Developed by UK-based studio Penny Black Studios, which is made up of Free Radical and Crytek staff, How We Soar is a VR flight experience that takes you across strange and magical lands on the back of a giant Phoenix. The player is in charge of where the mystical bird will take them, flying over torn or shredded environments that react to your movements, writhing and reforming into whole land, rather than scraps.

While travelling back and forth between what is real and what isn’t, the player is exploring what has previously been imagined and documented by ‘The Author’, coming across hidden memories and finding out what The Author’s life really was like.

Tom Turner, Managing Director at Penny Black Studios, gave an account in the blog post revealing the videogame of what was imagined when creating How We Soar: “Have you ever wondered how Harry Potter felt when he first rode a hippogriff in the Prisoner of Azkaban? Or what it was like for Bastian to fly on Falkor the Luckdragon in The Never Ending Story? Well this is exactly the experience we want to give you when you first enter the world that we’ve created.”

The player will use both the PlayStation VR head-mounted display (HMD) as well as the DualShock 4 controller to fill in the role as reins during the experience. How We Soar will be launching later this year after the launch of PlayStation VR this October.

For further updates of How We Soar, as well as all other PlayStation VR titles that will be emerging over the coming months, stay with VRFocus.