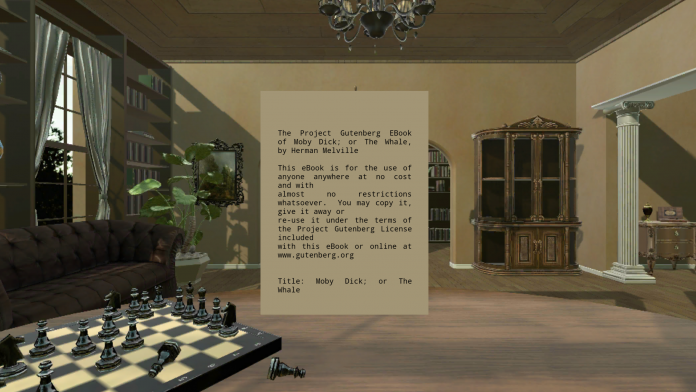 Over the past decade tablets, smartphones and eReaders have revolutionised how people purchase and read books, allowing anyone to carry their very own library of content around with them in their pockets and bags. Some would argue, however, that much has been lost in this transition away from physical copies. It was only a matter of them, then, that someone would create some virtual reality (VR) software that tried to meet both of these concepts in the middle. That software is Chimera Reader, out now for the Gear VR mobile-based head-mounted display (HMD) from Samsung and Oculus VR.

Created by dB Creations, Chimera Reader is available for free from the Oculus Concepts section of the Gear VR store. With no need for a Bluetooth gamepad (though support is featured), the experience places users in a virtual space resembling a 19th Century study with optional music, allowing them to enjoy any ePUB book stored on the user’s Samaung Galaxy smartphone without the distractions of the outside world.

“Chimera Reader was designed to extend the capabilities of the Gear VR as a multimedia tool,” an official website explains. “The Gear VR already has awesome support for video content, games, and even immersive audio; but there is little ability to experience the awesome world of books. We were immediately drawn to the idea of a private, personal library as a space to read – VR is, after all, a fantastic way to get away.”

dB Creations also plans to bring the platform to other VR HMDs in the future, though hasn’t yet specified which ones. For the latest on all Gear VR releases, keep reading VRFocus.