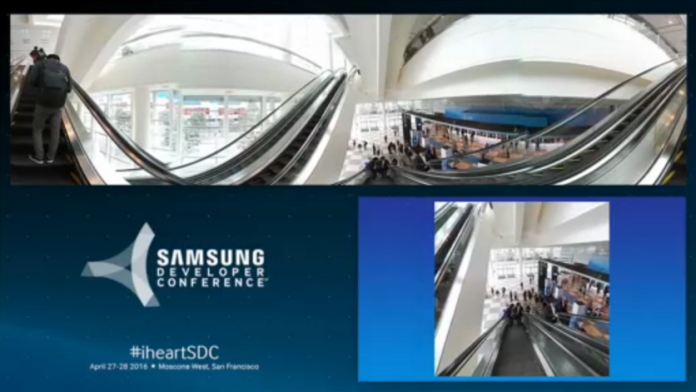 It is now the second day at the Samsung Developers Conference (SDC) 2016 and the importance of virtual reality (VR) has been highlighted from the beginning of today’s keynote, carrying on from the news of the Gear 360 camera launch date yesterday. It has now been announced that the Gear 360 will be fully integrated with Milk VR from launch day.

John Pleasants, Executive Vice President, Media Solutions Center America, Samsung, kicked off the keynote touching on how VR is transforming various industries such as gaming, social, and animation, saying: “For me VR will transform the way people interact with content, environments, and each other.” Pleasants went on to announce Gear 360’s full integration with the Milk VR app, and showcased the live stream of the Gear 360 to Milk VR, saying: “Download the app and you will be able to download your content straight to Milk VR with the touch of a button.”

As well as this announcement Pleasants riled up the audience by giving out free Gear 360 cameras to paid attendees, and threw tennis balls to attendees who did not pay to get in which can be exchanged for a Gear 360.

Stay with VRFocus for the latest news and updates at SDC 2016.