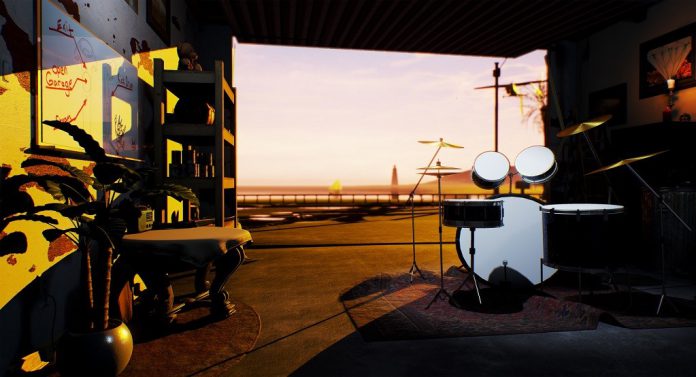 Earlier today VRFocus reported on The Music Room being announced for the HTC Vive head-mounted display (HMD). That title will allow users to play drums, laser harp and other instruments when it launches next month. But if you want to unleash your inner drummer before that, then Garage Drummer VR from Blazing Tree Studios has arrived on Steam.

Currently an Early Access videogame Garage Drummer VR features a nine piece drum kit with double kick and a multi-mode hi-hat. Created in Unreal Engine the videogame is set in a garage over looking a sunset beach where users can play as much as they want without annoying the neighbours.

Over the course of its early access development Blazing Tree Studios plans to add further features with founder Jordan Hill stating: “I would like to get this app in the hands of users as soon as possible because the feedback is important to me. The goal is to release a beautiful and functional learning tool. We have plans for many updates throughout the next six months and want people to join in on this wild frontier of VR simulations.”

Garage Drummer VR can be downloaded now for £4.79 GBP for the HTC Vive headset, with the price likely to increase once early access has been completed.

This isn’t the developers first virtual reality (VR) project. Announced in March 2016, On The Trail of John Muir is educational VR experience for the Vive and Oculus Rift set in Yosemite National Park. An exploration experience based in a future where the planet is polluted and overcrowded, the project is due to launch later this year.