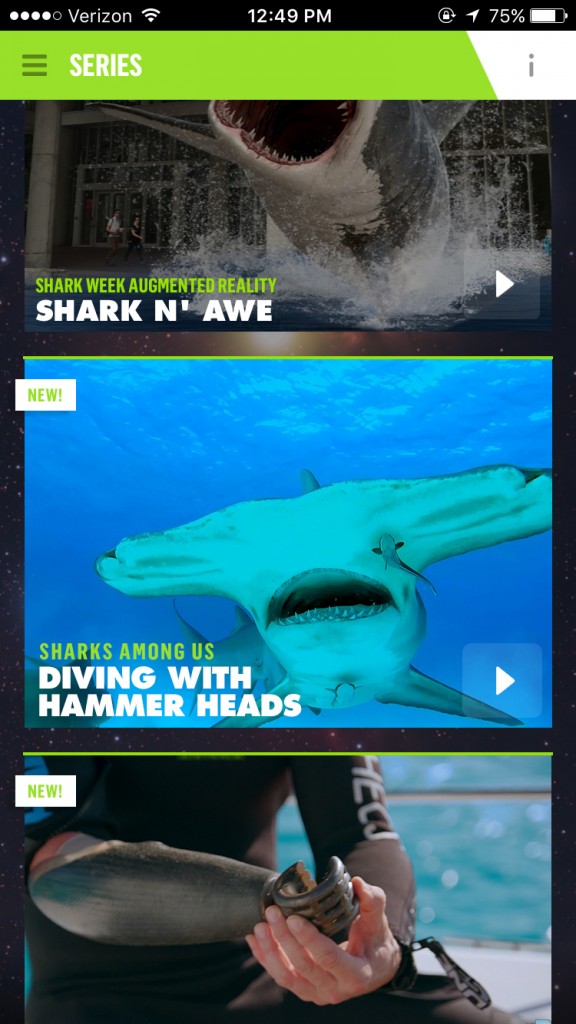 Starting this Sunday, 26th July 2016 is the Discovery Channels Shark Week. As part of it, Discovery VR will be launching several virtual reality (VR) and augmented reality (AR) experiences allowing users to dive headfirst into the underwater world of sharks.

There’s going to be seven 360-degree films rolling out between now and 2nd July, across Discovery Communications various platforms. Already available is Surviving Sharks featuring Australian Navy diver Paul de Gelder. Gelder has been involved in a shark attack and viewers can join him underwater as he shares his personal story of survival and speaks to the importance of sharks in our oceans.

Also available now is an AR experience on the Discovery VR app called Shark N’ Awe, providing an up-close-and-personal exhibit of sharks. Powered by AIREAL, each part of the experience features photo tools for sharing with friends.

Then there’s Dare to Swim in The Shallows, giving a special look at Sony Pictures’ The Shallows; Sharks Among Us: A New Way, following Marine biologist Dr. Craig O’Connell Shark as he takes viewers on a special dive at of his favourite hammerhead sites; Sharks Among Us: Why Sharks?; Sharks Among Us: Getting the Shot are also by O’Connell. Shark Pups, where puppies dressed as sharks recreate some of Shark Week’s most iconic moments, and Sharks 360, a fun compilation featuring well known shark species: hammerheads, bull sharks, nurse sharks, Caribbean reefs and great white sharks.

Alongside the Discovery app which is available for Android and iOS mobile devices, Oculus Rift and Samsung Gear VR, viewers can also head to DiscoveryVR.com, the Shark Week Facebook Page and the Discovery Channel on Youtube.

“SHARK WEEK is the biggest television event of the year, and we are excited to add virtual and augmented reality to the frenzy this year,” said Nathan Brown, SVP of Development & Operations for Discovery Digital Networks & Discovery VR at Discovery Communications. “With more than 800,000 downloads and 50 million views across Discovery VR, there clearly is a great appetite for engaging, quality content, and Discovery is leading the charge.”

VRFocus will continue its coverage of Discovery VR, reporting back with any further content updates.