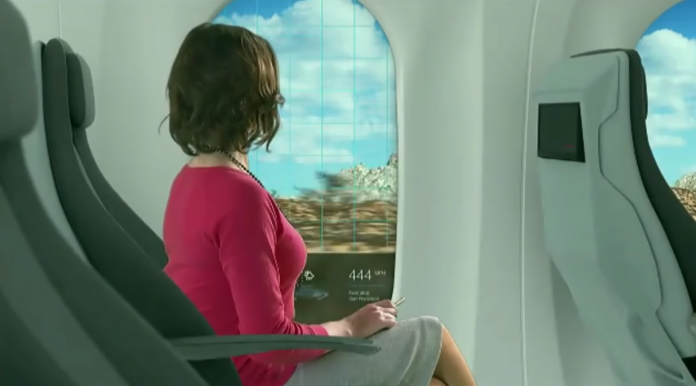 Augmented reality (AR) is more often than not used to enhance your surroundings by either adding information or broadcast to the surrounding world around you. AR is now being used to stand in place of windows on the latest high speed transport project, Hyperloop.

The Hyperloop train pod is being developed by Hyperloop Transportation Technologies (HTT) so that transport between major cities can be achieved at one of the highest speeds trains can reach, meaning the journey from London to Edinburgh, which currently takes over 4.5 hours by train, could be as fast as 30 minutes at the speed of 700mph. However, travelling at such a speed in a confined space has apparently proved too much for passengers to look outside during the trip, so windows using AR technology are being implemented.

With the partnership with Re’Flekt, a Munich-based AR and VR company, who designed the AR windows, it appears that the windows let you see a simulation of the sights you will be passing whilst on your journey, as well as other more interactive features such as the speeds the train is reaching, the weather outside and assumedly the weather of your destination, your current position in terms of your destination, and of course the time.

There isn’t too much information that has been shared by the company, but the video featuring the pod’s windows gives you a great idea of how the project is planning to pan out. There are many more questions regarding the nature of the windows and the motivation behind replacing regular windows with them, but there will be more coverage of the newest transportation technology as more information surfaces.

For the latest developments in AR technology, as well as all news and updates in the world of AR and VR, make sure to check back with VRFocus.