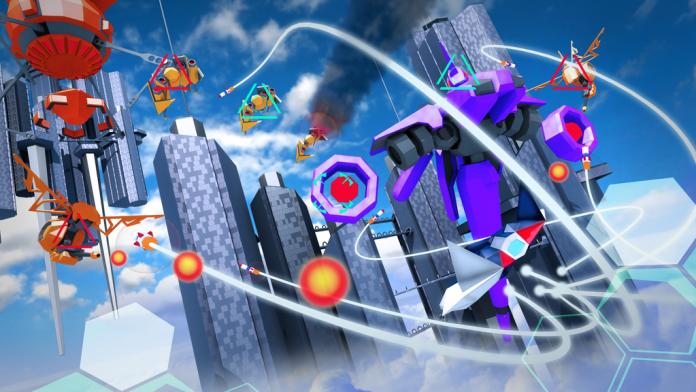 Italian indie developer MixedBag Games is currently busy working on not one but two projects for the PlayStation VR virtual reality (VR) head-mounted display (HMD) for PlayStation 4. Firstly, the team is porting its stylish, fast-paced flight shooter, Futuridium EP Delxue, to the device as a free update. Not only that but the team is working on a sequel to its original title named Futuridium VR. As the name suggests, this will be a VR-dedicated project. This week the studio has shared some brand new art for the latter of these 2 titles which can now be seen below.

A single piece of artwork can be seen below, which largely stays in line with the images of Futuridium VR that we’ve already seen. The title looks to adopt a much more colourful sky setting and the art seems to hint at the inclusion of homing missiles and a range of new enemy types. Futuridium EP Deluxe had players shooting all blue cubes on a map in order to open up a portal to the next level. It’s not yet clear if this same objective will be in place in the sequel.

Futuridium VR is expected to launch shortly after the release of PlayStation VR itself.

VRFocus will continue to follow Futuridium VR, reporting back with the latest updates on its progress.