FMX 2016 will play host to two separate virtual reality (VR) tracks this year. The event, taking place in Stuttgart, Germany, 26th – 29th April 2016, will deliver a series of talks on producing VR content (‘Virtual Reality for Production’) as well as discussions on the current state and future potential for VR as a new medium.

In the ‘Virtual Reality for Production’ track, David Morin (Chairman of the Virtual Production Committee) will curate a series of talks including VFX Supervisor Rob Legato as well as Adam Valdez (MPC) and Keith Miller (Weta Digital) as they describe the creative and technical process behind the VP of Disney’s The Jungle Book. Duncan Burbridge (The Third Floor) digs into immersive moviemaking in VR, whilst Ron Frankel (Proof) illuminates VP for Pan and Gods of Egypt. Furthermore, Kevin Margo (Blur Studio) uses his own film CONSTRUCT to exemplify his virtual production pipeline. A further panel with selected speakers will open the discussion on the impact of VR on movie-making.

The second track will feature a VR Opening Panel, “The Present and the Future of Virtual Reality”, which will discuss VR as it now stands on the brink of becoming a medium for mass adoption in the PC, mobile and console markets. Neil Schneider (The ITA), Simon Benson (SCE WWS), Daniel O’Brien (HTC), Billy Harrison (Optoma), Alon Melchner (wakingapp) and Dr Michael Madary (Johannes Gutenberg University Mainz) will appear on this panel.

Various speakers will also talk about their experiences in directing and designing for VR: David Bowman explains the joy of making Crytek’s The Climb and Nick Whiting (Epic Games) showcases the work on Bullet Train. Moreover, Anrick Bregman and Yates Buckley (both UNIT9) approach VR from a filmmaker’s and a neuroscientific point of view, Colin McGreal (Reel FX) defines dos and don’ts for VR filmmaking in advertising, and Tristan Salomé adds his perspective as the CEO of PresenZ, a new patent-pending technology. Personal experiences become the focus of the discussion “What it Means to Direct & Design for VR,” with Andrew Daffy (DAFFY LONDON), Rainer Gombos (REALTRA) and Alex Hessler (Tippett Studio). 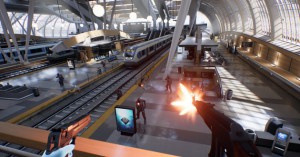 Techniques such as light field video, high dynamic range imaging, and multispectral lighting are at the heart of the “Computational Cinematography” set of talks, curated by Paul Debevec (USC). Presentations are provided by Jon Karafin (Lytro), who spotlights light field technology and the future of filmmaking, Gaël Seydoux, who introduces Technicolor’s light field-related R&D work, and Abe Davis (MIT), who contributes how the information present in data-intensive light field photographs can be reconstructed from a small subset of the light field photographs.

FMX 2016 will take place in Stuttgart, Germany, 26th – 29th April 2016, with more details on the various other tracks available on the official FMX website. VRFocus will keep you updated with all the latest details on the VR content on display at FMX 2016.