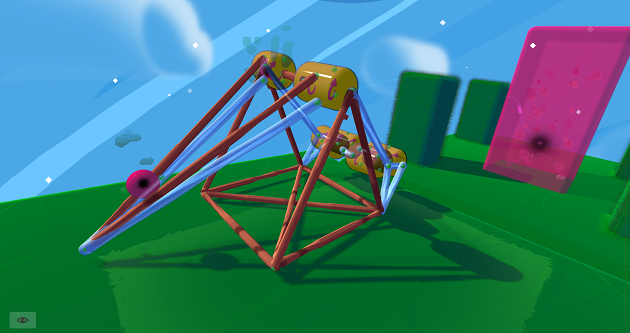 More details are coming out of the Steam VR Developer Showcase on the third-party titles on demonstration there. Virtual Reality (VR) title Fantastic Contraption by Northway Games is at the event and the developer has revealed several new pieces of information including the titles availability for the launch of the HTC Vive.

Confirming to VRFocus Northway Games has stated the building videogame will be a launch title in April alongside the head-mounted display (HMD). The studio has also revealed that the final version will ship with 100 levels for gamers to work their way through. Available at a later date will be a level editor allowing users to modify and create themselves, how much functionality the editor will have is currently unclear, but as Fantastic Contraption is all about building it should be fairly comprehensive.

Originally released in 2008 as a 2D flash game, Northway Games has adapted Fantastic Contraption solely for the HTC Vive, retaining the same ethos as its predecessor. Pre-orders for the headset are due to open in February 2016, with the first shipments taking place in April.

VRFocus will continue to bring you the latest details on Fantastic Contraptions from the Steam VR Developers Showcase as the event continues.