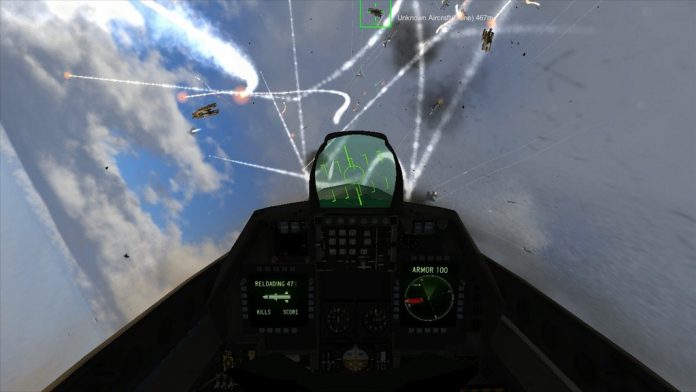 If flying by the seat of your pants, shooting down alien attackers in an F16 fighter jet is your thing, then Final Strike might be worth a look. Launched today for the HTC Vive and Oculus Rift head-mounted displays (HMDs), the videogame is the fourth virtual reality (VR) title to appear on Steam from developer Ghost Machine.

Greenlit on Steam last year Final Strike is a homage to the epic alien blockbuster films of the 90’s – like Independence Day – where players strap themselves into a heavily armed jet fighter to engage in aerial combat. A single-player experience, Final Strike allows players to take on the invasion solo or teamed up with an AI partner.

As it’s an Early Access title Ghost Machine will be adding continual improvements over the next 8 – 14 months, stating: “The game currently has most of the playable stages and enemies included, as well a most of the final artwork and soundtrack. The final version will include some additional polish in these areas, but will not differ significantly from the Early Access product.”

As sound design is an integral part of videogames, setting mood and ambiance Ghost Machine brought in the talents of game composer Sean Beeson (previous credits include Magic: The Gathering Dark Ascension and The 31st) to create the custom soundtrack.

The developer is offering a special limited time promotion for early adopters of Final Strike. Until 30th June 2016 the videogame is discounted by 15 percent, dropping the price from £6.99 GBP to £5.94.

Ghost Machine is becoming a prominent developer of VR videogames having already released two other titles across the Oculus Rift and HTC Vive platforms. These are Gumball Drift and Orc Assault. Then in August 2016 the studio will launch Golf Masters for the HTC Vive.

VRFocus will continue its coverage of Ghost Machine and Final Strike, reporting back with any new updates.