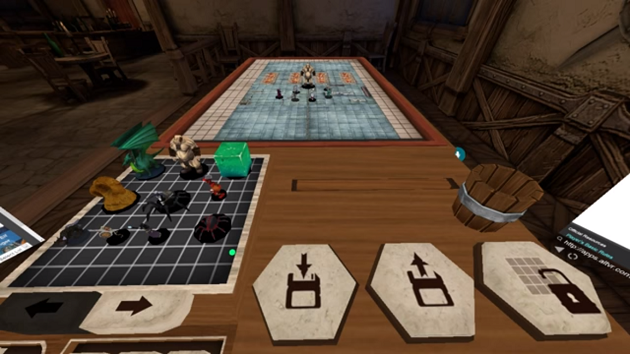 AltspaceVR the company behind a virtual reality (VR) communication platform, has collaborated with developer Wizards of the Coast to create Dungeon & Dragons (D&D)  in VR. Through AltspaceVR’s platform, fans of D&D can set up a free account and using an Oculus Rift head-mounted display (HMD) dive into the world of the table top board game.

To begin a D&D VR campaign players must set up a personal tavern, decide on settings and get a link to share with fellow D&D fans. After which its time to set up a battlegrid. This is the virtual D&D tabletop where dungeon masters (DM) place tiles to create environments and figurines to represent adventurers and the minions to be encountered. AltspaceVR have created a subreddit for those interested in registering as an official DM.

“D&D is extremely social, which is why we are so excited to offer it in AltspaceVR. Players love it! We’ve seen them hang out together for sessions lasting six hours — previously only developers spent that long in VR,” said Eric Romo, CEO of AltspaceVR to VentureBeat.

Currently AltspaceVR supports both the Oculus Rift DK2 and the HTC Vive HMD, with Gear VR support also said to be on the horizon. All the developer versions of the two HMD’s have been sold so anyone wishing to try D&D will need to wait until the launch of the consumer versions in the next few months.

VRFocus will continue to bring you all the latest news and on AltspaceVR’s projects, reporting back any further announcements.