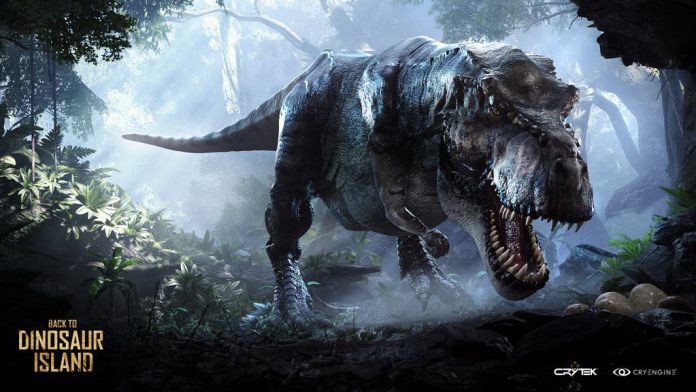 Crysis developer and CRYENGINE creator Crytek is going all-in on virtual reality (VR) technology. The company is currently hard at work on its first full VR title in Robinson: The Journey, which is on its way to the PlayStation 4 head-mounted display (HMD) for PlayStation 4. But VR fans will know that this is far from the studio’s first foray into the tech. Back at Gamescom 2014 Crytek showed CRYENGINE running a VR experience for the first time and it’s since exhibited two tech demos in the Back to Dinosaur Island series on Oculus Rift. Today, Crytek is releasing the first of those experiences for all to try.

Back to Dinosaur Island is now available for free over on Steam.  The experience, which made its debut at GDC 2015 in March, allows players to take on the role of a baby dinosaur. Set in a nest of dinosaur eggs, players are able to take in the title’s impressive visuals as they interact with a number of objects and creatures. The experience can be sampled using the Oculus Rift’s second development kit (DK2).

“Back to Dinosaur Island shows how intense, involving and rich virtual reality can be,” Crytek’s Director of Production, David Bowman, said of the news. “Players will see a powerful dinosaur breathing inches from their face, getting an unprecedented sense of its immense scale. To watch this scene in 2D is impressive, but when you’re in virtual reality, it becomes more intimate, and more exciting – giving you a feeling of presence and a belief that you’re really right there in a way that no other medium can.”

Back to Dinosaur Island actually forms the foundations for Robinson: The Journey, which also features prehistoric beasts. The title is set to cast players as a young boy named Robin that crash lands on a mysterious alien planet filled with dinosaurs. Crytek has confirmed that the experience will be coming to PlayStation VR ‘first’. It could be, then, that it will still show up on other HMDs such as the Oculus Rift and possibly the HTC Vive on PC later down the line, though don’t expect to hear about these potential versions for some time.

Robinson: The Journey doesn’t have a release date yet, though PlayStation VR itself is expected in the first half of 2016. VRFocus will continue to follow the title closely, reporting back with the latest updates on its progress.

The post Crytek Releases Back to Dinosaur Island on Oculus Rift for Free appeared first on VRFocus.