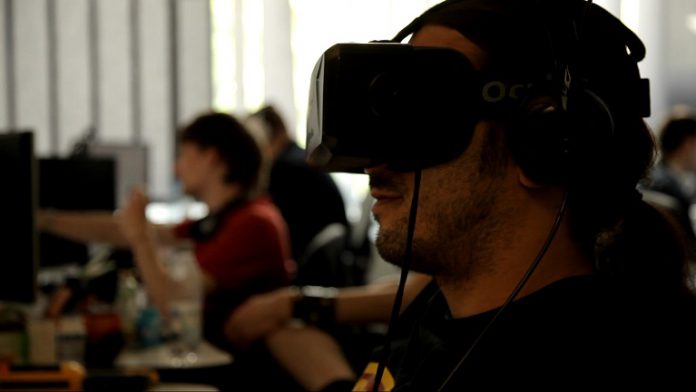 In the Q&A below, provided by Crytek, David Bowman, Director of Production at Crytek, offers a comprehensive look into the development of Back to Dinosaur Island, including the team size, the challenges faced in developing for virtual reality (VR) and the ambitions of the project.

Back to Dinosaur Island is available to download via Steam now, and acts as a precursor to the forthcoming Robinson: The Journey. Back to Dinosaur Island 2, a second technical demonstration developed for the Oculus Rift by Crytek, is frequently shown at VR events across the globe, and VRFocus will keep you updated with all future works in VR from Crytek.

Back to Dinosaur Island – A Making of

What is Back to Dinosaur Island?

It’s a technology demonstration that shows how intense and involving and rich virtual reality is. It shows what it feels like to be in a dinosaur nest, looking across a beautiful jungle scene, and then a dinosaur comes home with you in her nest. She comes up close to you and you get the chance to see what it would be like for a dinosaur to breathe right in your face. You’ll feel the scale of her, the immensity, the power. To watch that on a screen, when you think about Jurassic Park or another dinosaur movie for instance, you look at it and you’re like, ‘that’s cool’. When you’re in VR, it fools your brain into believing that you’re right there. It makes it immensely more exciting, immensely more intimate, and immensely more real.

What did you hope players would feel when they experience Back To Dinosaur Island?

Honestly and really, awe. I want the hair on the back of your neck standing up when the dinosaur comes at you.

The awe in Back to Dinosaur Island comes from the complexity of the scene and the talent of the artists. I’ll be blunt, we’ve got some of the most amazing artists working here so we’re a little bit spoiled that way, but those amazing artists want to work with the best tools, and our engine lets them create scenes that are not just ‘unbelievable’, they’re totally believable. In VR, you’re going for that sense that I’m in a space, I believe this space, it’s consistent, I am immersed in it…

Beyond that, we’d like people to think about VR and its potential in a wider sense after their experience. I’m old enough to remember the first color TV in my neighborhood. Everyone in the neighborhood went around to the first family to have the color TV, and they turned it around to the window out front so everyone could watch it. So we’re all in the front yard watching the first broadcast of Walt Disney’s Wonderful World of Color in color, and we were awestruck. Now imagine what’s happening right now, which is a brand new storytelling medium that’s not just simply gone from black and white to color, and that was amazing, but we’re instead we’re going from what is flat, to what is all around me. It’s going to change everything.

Now remember, we’re inventing stuff here. This was our first effort, and a couple of months work. But what Back to Dinosaur Island does is show that just a handful of developers who were just purely learning the craft, and had only the traditional game development tools available to them, were already able to make people go ‘that’s amazing’ and ‘that’s awesome’. We’re super-excited to share this with people around the world.

How many people were working on Back to Dinosaur Island?

18 people, more or less, was the biggest group of people on it. But we’re a big company, so we were able to call upon the resources of other people in the organization, for instance, from our engine team and other developers and creatives. But it was a small scale production by any standard. Of course, as we’ve added more projects into our production pipeline, we’ve scaled up so Crytek has one of the largest dedicated VR teams in the industry. 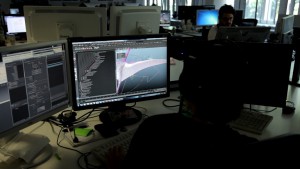 It’s a new medium, a new experience. What kind of challenges did you face?

Getting people to look where we wanted them to look was a huge part of the challenge. Game developers are control freaks, we want to micro manage the experience and in VR you give up camera control. That means you have to use different methodologies entirely, because we’re trying to control where you look, when you can look anywhere. We want people to make sure they see the entertainment, rather than look at the back of a cave when the dinosaur comes charging up to them, for instance.

Lighting is important. People are attracted naturally to lighter portions of the scene, so we needed to make sure the lighting was where we wanted.

Making sure audio and visual is precisely aligned is crucial, so the very moment the audio sounds off, you get it. We’re not the most sensitive auditory creatures, but we have a subsystem going on that is very much aware of direction, threat and distance and so on, so making sure audio was tightly aligned to the action was huge.

A surprising challenge was our foliage. The density of the foliage we started with was the same as we’d do it in traditional games, where we build near ground, mid ground and the background of the scene. In a normal game it would have been perfect, we could have shipped it, and everyone would have been raving about it! In VR where you can do subtle movements of your head, you can compare depth instantly. That depth perception is so much stronger than on a flat screen, so all of a sudden you have to really break the distance up. Discrete elements won’t work. You have to stage density carefully so that it looks richer and more natural.

Level design, as it were, is really becoming world design. You have to start behaving as if it were a world and always being consistent, because the human eye in VR is going to pick up the smallest inconsistencies.

What advice would you give to developers, looking back on this experience?

Whether you’re forcing a player down a narrow tunnel, or opening it up, be prepared for players to view the world from whatever perspective they could possibly view it from. Their first experiences are going to be exploring your world and your space, so you have to make sure the world can stand up to scrutiny.

Make sure your audio is considered from the first moment. It can’t be something you do at the last minute, it will not work. Lighting is vital, it’s what will help people focus on what you think is important. Darkness is equally important in this case.

Think about intimacy too. In the demo when you come face-to-face with the dinosaur, if you tilt your head to the left and to the right, she’ll interact with you. It’s just for a short moment she does that, but when she does that it’s very compelling. You’re convinced there’s a creature that’s looking at you, and caring about you, and making eye contact. It’s hugely powerful. Extrapolate that to other situations! I’ve seen some other demos out there in VR and people are doing some really interesting things on this front. Eye contact is super important and finally possible in a way that’s never been done before; it’s very emotional, intimate.

In VR, be prepared for your AI and your character behaviors and interactions to take into account that intimacy, and that’s going to be a lot of work for you.

You better have an engine that can do it, and with CRYENGINE we’ve shown we can do it. You better have talent that’s gonna take advantage of that engine, and you better have the patience to really do it properly, ‘cos quick and dirty won’t cut it when it comes to the intimacy levels that VR promises. What you can achieve though, well, it’s hugely exciting…

The post Back to Dinosaur Island – A Making Of appeared first on VRFocus.