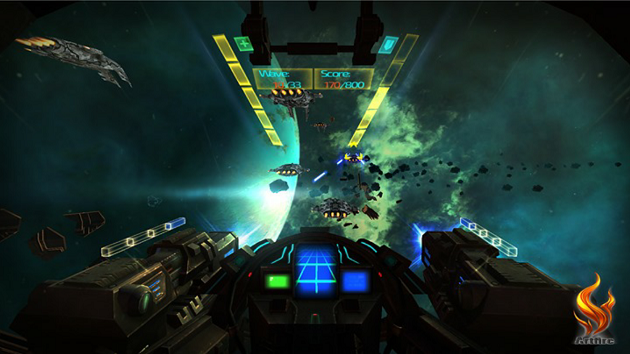 Mobile virtual reality (VR) head-mounted displays (HMDs) have been helping fuel the technologies growth prior to the launch of the main headsets later this year. The Samsung Gear VR is probably one of the best known, and since its consumer launch back in November a steady stream of software has been released for the device. Arriving today from developer Artfire Games is first-person sci-fi shooter, Cosmos Warfare.

Cosmos Warfare puts you at the helm of your own spaceship, tasked with fighting epic battles throughout the cosmos. Travelling through the universe via wormholes, you must find and destroy the enemy fleet. As your foes are vanquished you can collect items to upgrade your ships weapons and unlock additional missions.

All controls are handled by moving your head, whether you’re aiming, shooting or just flying around, no additional gamepad is needed. The Oculus Store rates the experience as ‘comfortable for most’, so beginners to seasoned VR veterans will be able to play.

Cosmos Warfare  is available to download now for free, and VRFocus will continue to bring you the latest Gear VR releases.