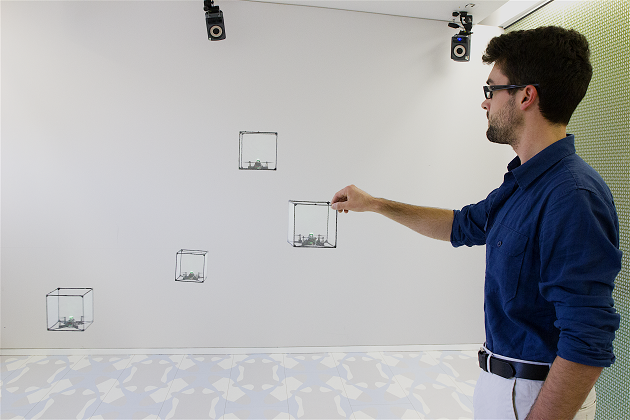 The team at the Human Media Lab created three types of BitDrones, each representing self-levitating displays of distinct resolutions. The PixelDrones are equipped with one LED and a small dot matrix display, while the ShapeDrones (pictured) are surrounded with a light-weight mesh and a 3D printed  frame, and serve as building blocks for complex 3D models. The DisplayDrones are fitted with a curved flexible high resolution touchscreen, a forward-facing video camera and Android smartphone board. All three BitDrone types are equipped with reflective markers, allowing them to be individually tracked and positioned in real time via motion capture technology. The system also tracks the user’s hand motion and touch, allowing users to manipulate them in space.

“BitDrones brings flying programmable matter, such as featured in the futuristic Disney movie Big Hero 6, closer to reality,” says Dr. Vertegaal in a statement. “It is a first step towards allowing people to interact with virtual 3D objects as real physical objects.”

“We call this a Real Reality interface rather than a Virtual Reality interface. This is what distinguishes it from technologies such as Microsoft HoloLens and the Oculus Rift: you can actually touch these pixels, and see them without a headset,” he adds.

VRFocus will continue bringing you all the latest VR related news as the developers expand the technology.

The post BitDrones Show Future of Virtual Reality Could be Physical appeared first on VRFocus.