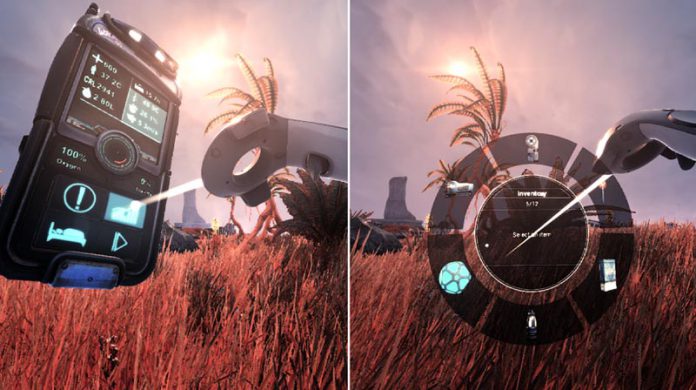 It was last month that developers Hourences and Grip Games along with publisher Teotl Studios released sci-fi exploration title The Solus Project on Steam. Supporting the Oculus Rift and HTC Vive head-mounted displays (HMDs) the teams have now launched an update which is primarily focused on virtual reality (VR).

The two major new additions are a VR inventory and crafting menu for both of the platforms making the process easier and simpler. The HTC Vive also gets additional functionality, the in game PDA now includes buttons that can access various PDA modes by using the opposite controller. The developer has also stated that it’ll continue to support VR with further improvements and plans for Oculus Touch which arrives later this year.

VRFocus will continue its coverage of The Solus Project, reporting back with any further announcements.

The full changelog of updates.

VR Inventory and crafting menu added for Vive and Oculus

Possible fix for the freezing, performance or audio issues on AMD systems

Fixes to non-translating words in all languages

Change in explorer diary to try and fix the incorrect number of reported items found.

Rare bug fixed where the sky and weather speed would become 0 forever. If you had this problem reloading your game with this patch should fix it.

Option for Sep Head removed due to not working well. The functionality is still there however for those who do want to use it, and it will continue to work if you had it enabled before. Can be toggled via the game.ini file HMDSepHead=False

Instead of Sep Head is the new option Use Vive Controller Rotation. When using Vive teleportation movement, the teleport destination will take over the rotation of the left controller instead of the camera. This used to be default on and is now default disabled! If you use a Walking movement mode, enabling this option will let you steer your walking direction by pointing the left controller, instead of turning your head.

VR inventory added! Works for Oculus and Vive. Using head aim for now but we are investigating replacing with right controller aim on Vive in the future. Inventory also allows much easier crafting.

When using the Vive, the PDA changes model into a new model with interactive buttons you can press using the right controller!

On Vive, the PDA now also displays the oxygen and toxicity levels.

Added new option to take over the left Vive controller rotation for movement.

When playing VR with the keyboard, remember that F12 is reset position and tracking

Swimming improved when using teleport movement. Can now aim at the top of the water surface to allow for traversing over the surface instead of always diving. Might contain a few issues or bugs still but mostly works.
The VR future and known VR issues

Investigating adding controlling menus with the right Vive controller instead of head aim.

Oculus Touch controllers are being considered for implementation.

Additional VR optimizations from Nvidia for GF1070/1080 cards are being investigated and considered for implementation.

Higher default resolution, but since the game is heavy and since you can tweak this freely yourself we consider this lower priority at the moment.