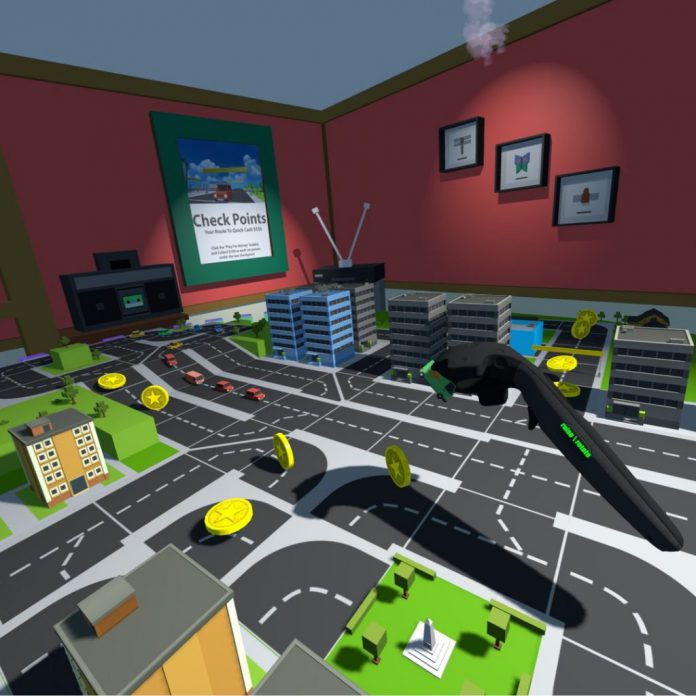 For owners of the HTC Vive head-mounted display (HMD) not a day goes by that new content can’t be found on Steam, whether its fully developed release or something a bit more experimental over on early access. And its on early access that we find a new arrival in the form of Car Car Crash Hands On Edition from indie studio Chocolatefudge Games.

The premise is simple enough, it’s all about playing with toy cars. Given a city layout players can switch sections of road around to link them up and create a network. Then set the vehicles off to drive around collecting coins to afford bigger and more elaborate towns. Viewed from a birds eye angle players will be able to see the cars whizzing by and how their road layout works and what can be changed to gain as many coins as possible. But there is carnage involved to, as intersections will see crashes happen, and police will turn up to cause mayhem.

As Car Car Crash Hands On Edition is a table top style affair, players will also notice there’s a whole bedroom/living room style environment to interact with, so more chaos can be caused that way.

The developer does note on the Steam page that: “Current game scope is limited. I would like to expand it but need feedback on where to spend my limited timeresources.” Current plans for the title include additional game modes, more levels, power-ups and unique challenges.

Car Car Crash Hands On Edition can be purchased for £3.99 GBP on Steam and VRFocus will bring you any further news on the title as updates are released.