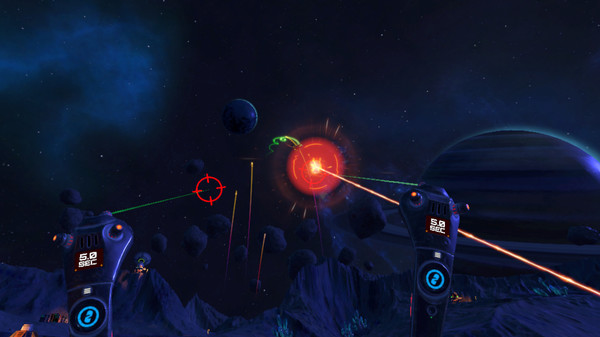 Virtual reality (VR) offers a brand new medium with an entirely new set of opportunities for developers. However, videogames as a whole have reached the point where many creating them have experienced a vast wealth of different gameplay designs both as children and during their careers. We’re at a tipping point where VR is bringing wholly new mechanics to videogames and yet at the same time reflecting on that which had brought us to this point over more than 30 years.

Inbound, the debut title from the newly formed Gyoza Games, must certainly resides in the latter camp. It’s a videogame, through-and-through. There’s no debate as to whether or not this is a VR ‘experience’ and no suggestion that it’s intending to redefine or establish new mechanics or gameplay situations. It is pure unadulterated videogaming; for better and for worse.

Aping 1980 classic Missile Command with considerable grace, Inbound brings the ideals of retro arcade shooting up-to-date with the advantages of modern technology and the benefits of VR as a new medium. Rather than the player being represented by a crosshair on the screen, they are instead a giant within the world able to reach out and command their defences directly. Blame for failure to do so is only culpable by your own ability.

Standing within the miniaturised world that is your base of operations, the player will be bombarded by enemy attacks from a distant, unknown source. Instead of targeting the player directly however, the weapons launched into the playspace are aiming for the buildings within your base. The player must take charge of two turrets (localised to left and right motion-controllers) and ensure that none of the incoming missiles hit their targets. Should that happen buildings will be destroyed, and once the last building falls it’s game over. 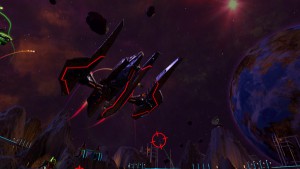 The turrets that can be utilised to prevent the missiles reaching your base act only on a 2D plane. The player must wait until either of the crosshairs aligned to their motion-controllers sits perfectly upon their target before pulling the trigger to fire, which certainly takes some getting used to. Other enemy units, such as ships and mechs, can be taken out in a similar fashion when in range or hit with your own missiles (aimed with the same reticule) via the touchpads. It’s a shame Gyoza Games didn’t see fit to add more weaponry options or power-ups, as the two firearms and limited enhancements become familiar in their limited nature all too quickly.

One additional aid the player has is that of time distortion. When things are getting a bit too hectic the player can slow down time and give themselves a temporary advantage. However, its use is very limited and best saved until later waves; while Inbound starts off relatively gently, the difficulty soon ramps up.

The problem with Inbound’s core gameloop is one of longevity. While Gyoza Games will undoubtedly continue to support Inbound post-launch with a variety of new maps, enemies and other potentially (and obvious) add-ons, the basic gameplay is so simplistic that it almost feels artificially limited. Once the player has adapted to the depth of the two weapons in their arsenal the only challenge that remains is a high-score arms race; this is of course the fundamental structure of the videogames for which Inbound is emulating in a new medium, but in the modern age it’s unlikely to attract an audience to return for more than a weekend. 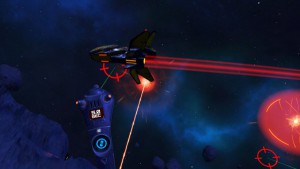 Simplicity is key in Inbound, and some will find its return to basics refreshing. Others however, are likely to suggest that there simply isn’t enough here to warrant extended play. Gyoza Games’ ethos of creating short-and-punchy VR videogames will undoubtedly earn the studio a reputation amongst the core demographic in time, but for now Inbound stands as a fun yet short-lived retro-inspired videogame in VR.