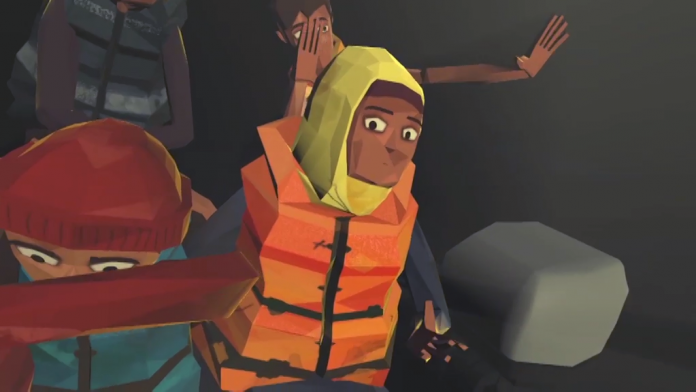 When one thinks of the BBC, the types of words that come to mind might include traditional, safe-playing, Paxman. But now perhaps technical innovation and virtual reality (VR) will in time be included to shake up its image now that it has revealed its latest projects in an effort to embrace VR, and there are certainly very few rocks left unturned.

VRFocus was invited along to the unveiling of all the work the BBC has been concentrating its Research and Development (R&D) team on, and it was evident that they have been trying to cover all grounds in the emergence of VR, and was even allowed a sneak peek at the title to debut at the Sheffield Doc/Fest today. The broadcast giant had experimented with several head-mounted displays (HMD), both mobile and PC-based, including the Google Cardboard, Samsung Gear VR, Oculus Rift, and HTC Vive, in order to either repurpose old work or reimagine how to create content.

The three pieces to debut at the UK festival are We Wait, Easter Rising: Voice of a Rebel, and Home. All three differ from each other in terms of content, design, and user gratification. The key thing to note about each of these experiences is that they have come straight from the R&D labs, most of which are under developed right now, and there is certainly room for each of them to grow.

We Wait is the more serious of all of the VR applications that were demoed, concentrating on a fictitious family of migrants attempting to travel from Turkey to Greece. Although the family and voices weren’t authentic, the inspiration for them was as the BBC used a collection of stories from reports.

The spin that is used to justify its application to the Oculus Rift HMD is that while sitting amongst the migrants they actually interact with you by looking back into your eyes when it’s sensed you’re looking at them. Eye-contact in VR is something that can prove to be quite powerful, and We Wait uses it with great subtlety. There is also a sense of living their tumultuous journey while being bunched together, immersing you into a world that assumedly hasn’t been lived by many. 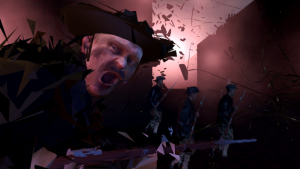 The BBC created another Oculus title, but this one was much different, immersing people much more severely than eye-contact. Easter Rising: Voice of a Rebel is a recounting piece of a man’s memories of the 1916 Irish Easter Rising. This VR documentation takes an artistic plunge, and was developed with VR studios such as Crossover Labs and VRTOV. While being anchored to the tape player that narrates Willy McNieve’s memories, the viewer is taken through how Willie got involved in the conflict. 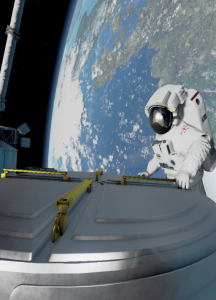 Home, however, gives a completely different experience being completely comprised of an HTC Vive HMD with motion controllers, a heart monitor, and a rumble chair. Although this is the least polished of the VR demos, it is the most immersive both in its hardware and in its development as this was made using UE4 for its more intricate design, whereas all the other projects used Unity. The users is taken through different stages of what an astronaut is expected to do, all before something goes a little wrong for the whole crew.

There was one other Oculus Rift title, the Turning Forest, but rather than being shown as a prospective project from the BBC, it was explained that this was the result of an academic venture with University College London (UCL). Although it has already been premiered, it is worth considering as there was real emphasis on the creation of sound within VR, and its application as a form of children’s entertainment is something that could come hand-in-hand with the concept of putting on the TV to keep them quiet.

The 360-degree videos, which are currently already available on the BBC, are examples of what the broadcasting company are doing to connect with audiences right now using VR. Although exploring space or living memories is a real thrill, it is still not accessible to the wide majority of its audience. Featured were Attenborough 360, and Rome’s Invisible City, which both involved repurposing already shot footage.

We Wait, Easter Rising: Voice of a Rebel, and 360-degree film Trooping the Colour are all currently available to download from BBC Taster, with Home following closely in the next couple of months.

For more on the VR developments made by the BBC and the latest news and updates, stay with VRFocus.