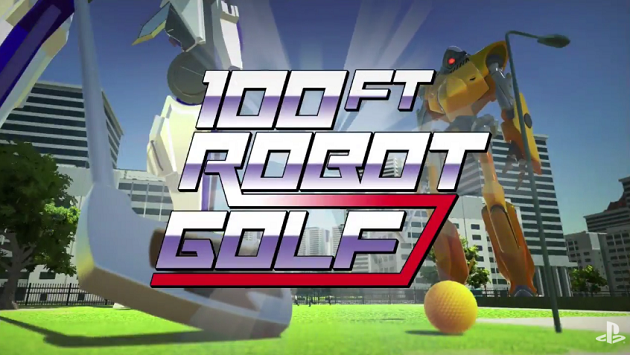 If there’s one virtual reality (VR) videogame that everyone’s talking about coming out of the 2015 PlayStation Experience fan event last weekend it’s almost certainly 100ft Robot Golf for the PlayStation VR head-mounted display (HMD). Indie developer No Goblin revealed this slapstick project during Sony Computer Entertainment’s (SCE’s) opening keynote, much to the amusement of the audience. Of course, beyond the joke there is a full title to be played here, which No Goblin spoke about shortly after the conference.

Speaking on PlayStation’s own coverage of the show, the developer’s Dan Teasdale confirmed that 100ft Robot Golf will have, of all things, a story mode. “So we have a bunch of different modes,” he explained. “We have a story mode in the game where you’re basically living out the lives of 100ft robot golf pilots, I should say, and those are told through the cheesiest 90’s kinda mecha animation that we can make, kinda like the things you saw at the end of the trailer. That’s basically our story mode. So you’ll go through and see like one story of intrigue and mystery of all these people trying to like lower their handicap.”

The developer also explained that 100ft Robot Golf will feature a number of different rule sets, though the primary one will see players compete to get their ball in a hole first rather than in the least number of shots.

When later asked if robots would be customised, Teasdale replied: “Absolutely. So, our last game was Roundabout which was a spinning limousine game and we had full customisation of the limo there. Like you could put hats on your limo and stuff like that. And we’re taking that through here.”

Finally, Teasdale confirmed that 100ft Robot Golf would be releasing in 2016, though didn’t mention if it could be a launch title for PlayStation VR, which is expected to hit in the first half of next year. For the latest coverage on this title and everything else on the way to PlayStation VR, stay tuned to VRFocus.