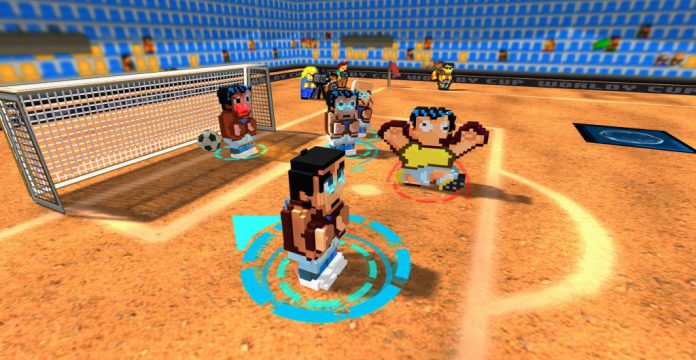 There have been titles in virtual reality (VR) which cover the areas of retro gaming, futuristic gameplay, and sport such as football. Worldy Cup boasts all three in this “unique” title, now out as a Steam Early Access title.

Compared to many VR titles, the design and style of Worldy Cup is hard to come by, with pixelated characters in hyper realistic environments for players to compete in a game of football either with or without friends. “It’s fast, super fast. It’s shiny, glamorous and gorgeous even in its perfection of its campy antics. But under the shiny surface, there is tactical depth and risk and reward elements to every bit.”

Some of its “kickass selling points” include: it is playable in both VR and non VR, there can be up to six players either couch co-op and VR mode multiplayer on one screen (presumably for the non VR version) and wifi multiplayer across headsets; much like the title suggests there are teams that can compete from around the world; and intensity is guarenteed as a feature as well as enjoyment.

Worldy Cup, developed by Tommosaur, is currently on Steam as an Early Access title for the HTC Vive and Oculus Rift. Between now and the six to 12 months it will take to develop the final version, gameplay is expected to be enhanced as well as tournament progression. The price will also rise from the current price tag of £6.99 (GBP).

For more on the latest HTC Vive and Oculus Rift releases, as well as all the news, updates, and features in the world of VR, make sure to check back with VRFocus.