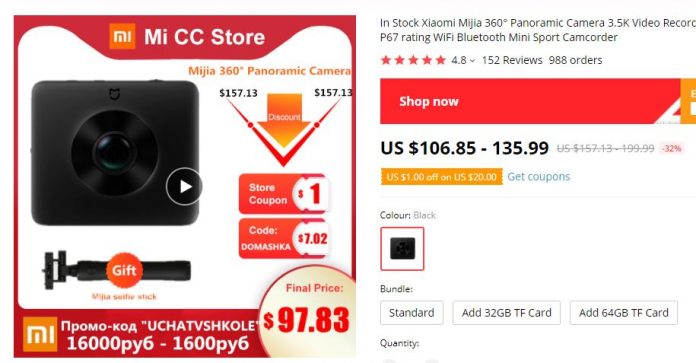 
The Xiaomi Mi Sphere (reviewed here) is still one of the best 360 cameras for photos.  But if you go to Amazon or eBay, it’s only available from resellers for as much as $500+, which is around double its original price.  Is it still available?  Where can you buy it at more reasonable prices?

The Mi Sphere has been around for 3 years now, which is three generations in the fast-moving 360 camera industry.  Yet it is still one of the best 360 cameras for photography in 2020.  The biggest problem is that it’s hard to find.  I found some on Aliexpress for very low prices, but Aliexpress is a little bit iffy.

Aliexpress is somewhat like China’s version of Amazon Marketplace, where merchants offer a variety products, usually for far less than their cost in the US or Europe, and generally cheaper than even eBay.

Anyway, I ordered a Mi Sphere on Aliexpress, and will supposedly arrive on September 6.  I’ll update this post on if or when I receive my order.

The post Where to buy Xiaomi Mi Sphere in 2020 (without overpaying)? Is it safe to buy from Aliexpress? appeared first on 360 Rumors.