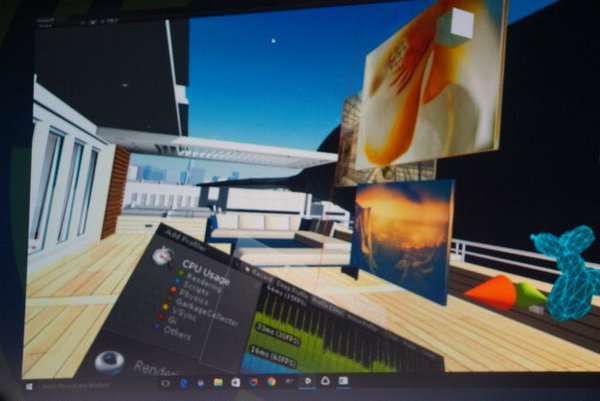 Each of the three key engine producers, Unity Technologies, Epic Games and Crytek, have been discussing their plans for additions to their products that will allow developers to create videogame projects while in virtual reality (VR). The implications of this are obvious to many – especially those who have already made the jump into VR development – but there are wider implications for the videogame industry. In-VR editing won’t just benefit those producing content for the new medium, but videogame designers as a whole.

The simplicity of using these applications is the real benefit. VRFocus has already discussed the fact that Unreal Engine 4’s VR Editor is currently leading the pack, but it surely won’t be long until CryEngine V and Unity 5 catch-up. With this in mind, we’ll be using Unreal Engine 4 as an example for the basis of this article, but there’s no doubt that, in time, the rules will apply to all three of the leading engine platforms.

Jumping straight into a visualisation of a basic level construct (it has always been assumed that the basic template for a level or area would be constructed before using the VR Editor, though as with much of what has been seen thus far, this will likely change in time) the user is gifted with object placement, manipulation, duplication and much more besides. More importantly however, reskinning textures and adding physics elements (pre-constructed currently, though Epic Games has previewed the use of Blueprints in their VR Editor) mean that developers are able to create believable worlds with dynamic gameplay elements in just minutes.

Most of the above can be accomplished with a traditional desktop set-up of course, simply without the direct and immediate delivery of visual information. This aspect of the VR Editor is essentially the most important for VR developers, but will also directly benefit all visual designers utilising game engines. Upon completing their chosen placement, the user can immediately zoom-in to 1:1 scale and traverse the world as the player would. There’s no build times and no demands to exit the editor programme, meaning that should an object, light source or other item be out of place it can immediately be moved. 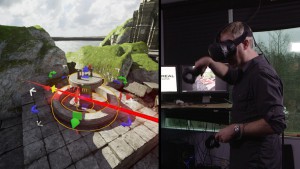 The implications of this stretch far beyond VR development, into traditional videogame design and even other industries. Obvious examples are architectural visualisation, concept artists and fashion designers, however even movie creators and VFX artists are also likely to benefit. So much so in fact, that Brendan Iribe, Oculus VR CEO, stated at the Game Developers Conference (GDC), San Francisco, last month that Oculus Story Studio is already working with Unreal Engine 4’s VR Editor for internal projects.

Where each of the in-VR editors will venture to in the future is unknown. All three companies have discussed their intended delivery timelines over the coming months, be it updates or launches, but years from now they will undoubtedly be in a very different position. What is certain is that, for the first time, VR has positive implications not just for the end user, but for the creative community working to deliver those products.