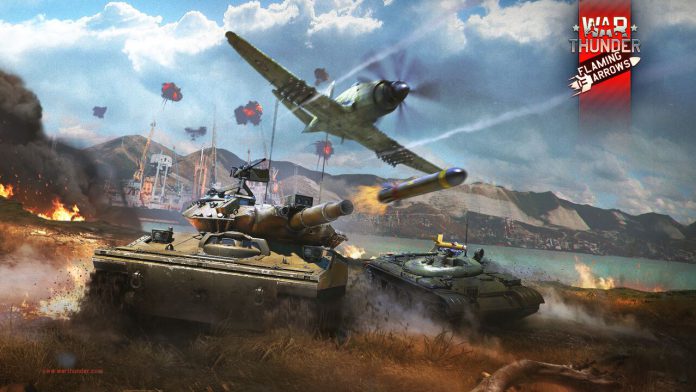 Last month saw an update for War Thunder, Gaijun Entertainment’s free-to-play virtual reality (VR) war tanker, where there were additions of Soviet guided missile tanks which were available for very limited nations. The latest update, 1.59, dubbed Flaming Arrows, introduces much more than the last, and for a wider set of nations.

There will be four new tanks with anti-missile weaponry, one for each of the four nations that feature in the videogame, which is said to “bring a totally new short and long range destructive capability to ground battles in War Thunder, thus expanding the number of tactics and strategies players can employ”. These four anti-tank missile vehicles, which can be seen in action below, will consist of the Soviet IT-1, the German Raketenjagdpanzer-2, the Vietnam-era US M551 Sheridan, and the Swedish Strv 81. Each of these tanks offer a completely different type of gameplay, including more armour, different amount of missiles launched, ability to launch both artillery and ATGMs, and increased ATGMs.

Two maps will also be added in this update, which will include the Port Novorossiysk, situated on the coast of the Black Sea with combined battles, and a 128×128 km map for English Channel dogfights. “For the Novorossiysk map Gaijin Entertainment’s painstaking attention to detail saw its artists create some incredible map design work based on archive data, photographs, historic air recon intelligence photos and newsreel footage.”

Lastly, there will be 25 new vehicles added across five of the nations in the videogame, which will therefore increase the overall number of vehicles to over 700. There is one more addition to this update with the He 219, or Eagle-Owl, which has been added and was created by a member of the War Thunder community along with developers of the videogame.

For more updates from War Thunder, as well as all the latest news and updates in the world of VR, make sure to check back with VRFocus.